Today’s distribution platforms offer a higher quality display of subtitling and more flexible positioning options than traditional analogue television. File- and IP-based production facilities demand clearly specified ways to carry subtitles during production, exchange, archiving and distribution to their customers, including the use of online services. To handle these new contexts, broadcasters need a low-complexity, but thoroughly specified subtitling format. 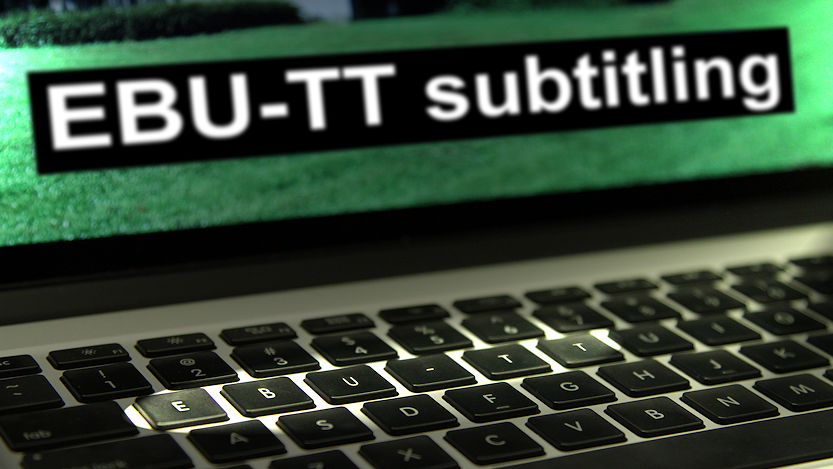 Technical aspects of subtitling are being addressed by the EBU Timed Text group, which is part of the EBU's Strategic Programme on Production.

To meet broadcasers' requirements, the EBU Timed Text Group has created EBU-TT, which stands for EBU Timed Text. EBU-TT is the follow-up to the widely used EBU STL format (EBU Tech 3264). The EBU-TT family consists of the following specifications:

EBU-TT Part 1 (EBU Tech 3350) defines an easy-to-use XML structure for the interchange and archiving of subtitles. It builds on the W3C Timed text Markup Language (TTML) 1.0.

Since May 2017, the EBU-TT metadata elements are defined in a single document (EBU Tech 3390). This makes it easier to maintain an overview and avoid duplication.

EBU-TT Part 3 (EBU Tech 3370) provides a System Model and Content Profile for authoring and contribution of live (and prepared) subtitling. It further introduces the concept of processing 'nodes' that can help improve subtitling quality in production. This part is also known as "EBU-TT Live".

EBU-TT Live does not prescribe which carrier mechanisms to use. These mechanisms can be defined in supplemental publications. EBU Tech 3370s1 is such a supplement. It describes how to carry EBU-TT-Live streams using WebSocket.

This is not an official EBU spec, but an Open Source project that builds on the EBU-TT Live spec. It was used to test the specification in code and is a useful resource when adding EBU-TT Live support to products. See http://ebu.github.io/ebu-tt-live-toolkit/ for more.

EBU-TT part 'D' (EBU Tech 3380) is the format for the distribution of subtitles over IP. There also is a document for the use of EBU-TT-D in ISO BMFF /  MPEG-DASH (EBU Tech 3381). Other specs reference EBU-TT-D, such as HbbTV 2.0, DVB TTML Subitling and Freeview Play.

The EBU has also developed a recommendation on the transport of subtitles inside and outside of MXF files (EBU R 133).

EBU Member BBC has published BBC Subtitles Guidelines. These are intended to serve as the basis for all subtitle work across the BBC (prepared and live, online and broadcast, internal and supplied)

The EBU Quality Control Group is extending the range of QC Tests for subtitling. All published tests are available via EBU.IO/QC. To participate in the drafting work, join the QC group.

Also check out this list of existing open source subtitling software and samples.

We are aware of the following parties supporting EBU-TT and/or IMSC in products/tools.*

EZtitles - Subtitling software that can be purchased or rented.

EBU-TT Live Interoperability Toolkit - A set of components for generating, testing and distributing subtitle documents in the EBU-TT Live format.

FAB Subtitler - Supports EBU-TT-Live for the creation of (live) subtitles.

(Note: With IMSC we refer to the IMSC Text-only Profile - IMSC support implies EBU-TT-D support, as it is a subset of the former.)

AppleTV and iOS - play back IMSC in fragmented MP4.

dash.js - A reference client implementation for the playback of MPEG DASH via JavaScript and compliant browsers. Suppports IMSC.

EZtitles - Subtitling software that can be purchased or rented, supports EBU-TT-D.

FAB Subtitler - Can export in EBU-TT-D and IMSC.

Subcheck - A commercial service from the IRT for validating IMSC subtitling files (beta version free for a limited period of time).

VLC - The versatile media player has support for TTML, especially EBU-TT-D and IMSC.

If you are supporting EBU-TT and/or IMSC in your product(s) and would like to be added, send us an e-mail via: tech@ebu.ch Likewise, if you spot an error in the list, please let us know via tech@ebu.ch too.

* Disclaimer Above list of parties providing EBU-TT/IMSC products/tools is based on information provided by these organisations themselves, such as publicly available product specifications. Please note that the EBU does NOT verify conformance of the implementations. Inclusion in the list also does NOT mean the EBU recommends the party or its product(s)/tool(s). Users should verify the suitability of any product/tool themselves. Where tools have no clear company owner, the tool name is used.

Informative XML sample and XML Schema files can be found via:

Artificial Intelligence is the core technology used to extract and generate metadata.

The Media Cloud and Microservices Architecture (MCMA) work provides code and best practices for the integration of processes in production workflows, including Artificial Intelligence in the cloud.

Metadata is becoming increasingly important to broadcasters. It is essential for the media industry to continue to develop specifications and promote innovation, such as semantic technologies.