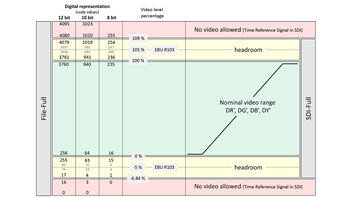 The EBU has published two new documents to help media professionals deal with misunderstandings that arise frequently around video signals and how to handle HDR in video production.

The first publication, EBU R 103 v3.0 – Video Signal Tolerance in Digital Television Systems, addresses confusion regarding the use of different video ranges. The most important one involves distinguishing between 'full' and 'narrow' range video.

The television industry primarily uses 'nominal range' video signals (represented as the green area in the figure). This enables preservation of under- and overshoots, using the signal range headroom (shown as yellow in the figure), thus avoiding clipping and related artefacts. This is especially important in live broadcast production, where, for example, changing light conditions may lead to the signal going outside the nominal range for brief moments.

The use of ‘full range’ video can also lead to misunderstandings. Video transferred over SDI has slightly fewer code values than video transferred as files can have, because SDI reserves some code values for synchronization (shown in red above). It thus is important to know if equipment interfaces expect 'File-Full' or 'SDI-Full' range video.

Another SDI-related topic is addressed in the second publication: EBU Tech 3375 – Signalling and Transport of HDR and Wide Colour Gamut Video over 3G-SDI Interfaces. Questions from EBU Members about HDR signalling issues encountered in real-world SDI infrastructures led the EBU Video Systems group to create these guidelines. They explain how HDR signalling works when producing in 1080p/25 or 1080p/50, setting out what should be specified and tested for to guarantee interoperability.

These two new publications are part of a series of activities that help EBU Members address technical challenges in introducing new technology. Other examples include the recently published test results of the Avid DNxHR HQX, Panasonic AVCUltra and Sony XAVC QFHD codecs (EBU Members only) and the Webinar on the new EBU (U)HDTV HDR Colour Bars.