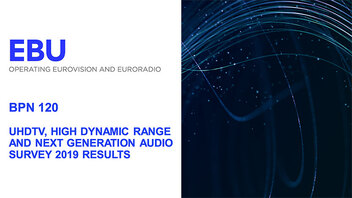 EBU Technology & Innovation has published the results of a survey, conducted among EBU Members in late 2019, on the adoption of UHDTV services, including High Dynamic Range (HDR) and Next Generation Audio (NGA) formats. The results were published as BPN 120 and are available to EBU Members only.

The data, gathered from about two dozen EBU Members and countries, suggests several overall conclusions – though the wide range of economical contexts and technical infrastructures in the European broadcasting area makes generalizations difficult.

A convergent evolution towards UHDTV

One overall conclusion is that the introduction of UHDTV services is occurring more in the manner of an evolution, rather than a revolution. UHDTV services are a core part of broadcasters' strategic planning, but not the highest priority on the agenda. Rather, the introduction of new production formats is likely to follow the rhythm of typical replacement cycles for technical equipment: about 50% of the survey respondents indicated that the adoption of UHDTV would form part of their transition to IP infrastructures.

In terms of HDR formats, EBU Members have specified both HLG10 and HDR10 as distribution formats. The appetite for dynamic metadata for HDR seems to be low however, with more than half of the surveyed Members not planning to use it. Only three broadcasters confirmed plans to use dynamic metadata, and each of those expected to use a different system (SL-HDR, Dolby Vision, HDR10+).

With regards to audio, the survery shows that media organizations are interested in Next Generation Audio, with several of them considering to offer NGA services. However, obstacles remain, with respondents pointing to a lack of support for multiple NGA codecs by CE vendors, a lack of good user interfaces to access NGA features in TVs, and questions about the user acceptance of new services.

The EBU intends to repeat the survey on a yearly basis. It is used to shape the work of the Strategic Programme on Production, which includes the EBU Audio Systems and Video Systems groups. These groups help with the understanding, testing and best use of new audiovisual technology.

Nominations for the EBU Technology & Innovation Awards 2021 will close on 14 April. We've been looking back at the projects honoured in 2020, when NPO's...

With nominations still open for the EBU Technology & Innovation Awards 2021, we continue our series on the projects honoured in 2020. There were three...

To mark the opening of nominations for the EBU Technology & Innovation Awards 2021, we're looking back at the projects honoured in 2020. A newly created...

BroadThinking 2021: how broadcasters' online services are meeting the SVOD challenge

This year's BroadThinking conference focused strongly on how broadcasters – and particularly public service media – can survive in a world where global...