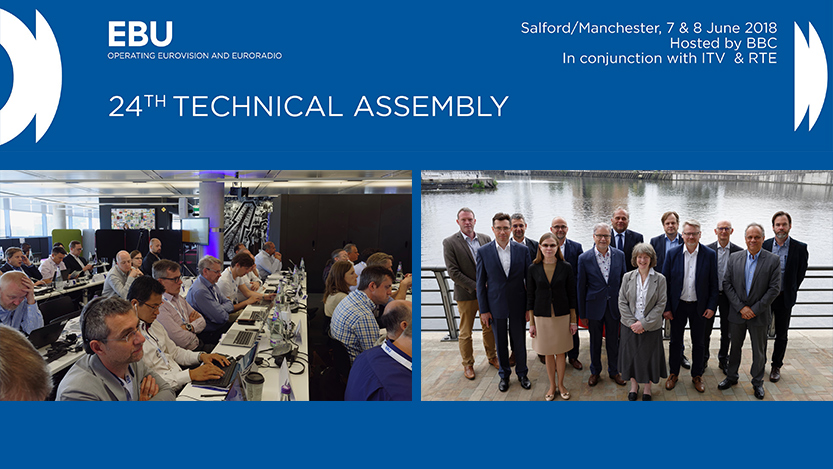 Left: delegates at the TA in Salford, UK. Right: the new EBU Technical Committee headed by Judy Parnall, BBC (in the middle)

Against a backdrop of cutting-edge technology demonstrations and presentations, last week's 24th EBU Technical Assembly marked the start of another year of cooperative work in media technology innovation. Delegates endorsed an updated Workplan and elected a new Technical Committee, chaired for the first time by a woman.

Videos and presentations of at the Technical Assembly 2018 can be accessed by all EBU Members and TA participants.

The EBU Technical Assembly has elected Judy Parnall, BBC's Head of Standards and Industry, as Chair of the new EBU Technical Committee – the first female Chair in the history of the EBU's technical governance body. Parnall was already a Member of the Technical Committee and will be supported by Vice-Chairs Olli Sipilä (YLE) and Thomas Saner (SRG SSR) during her two-year term.

“I am honoured to be taking on the role of Chair of the TC", said Parnall. "Our industry is once again in a time of rapid change and we can all prosper through it when we work together. Technology is an enabler to help us all to move on, and we do it best when we collaborate through the work of Members and T&I [EBU Technology & Innovation], whether we are a small or large organization. I look forward to us all sharing even more in the future”.

Held this year in Salford, Greater Manchester, and hosted by BBC in conjunction with ITC and RTÉ, the annual TA also reviews the Workplan. Endorsed at the 2017 Assembly, the two-year Workplan was updated to cover two new Strategic Programmes and the work done over the its first 12 months.

Presented annually at the TA since 2016, the Technology & Innovation Award recognizes technical work that 'makes a difference' in public service media. This year's winner of the Technology & Innovation Award, the EBU ADM Renderer (EAR) for Next Generation Audio, is a collaborative project of the BBC, France Télévisions, IRT and  b<>com. The winning project, drawn from a list of submissions from across the EBU membership, was determined by a secret ballot of the TC in May, and revealed by the outgoing TC Chair Egon Verharen (NPO) in Salford.

The state of broadcast-relevant technology

Held over two days, the TA assembles demonstrations and speakers on technical topics that have an impact on media production and distribution. In her keynote to the 2018 TA, BBC's Head of Design & Technology Claire Boswood summarized how the British broadcaster views the challenges and opportunities presented by the evolving technology landscape and changing audience habits. Peter Russell, Technology Director at ITV, followed with an overview of how his organization is preparing its infrastructure to seize the opportunities and deliver on expectations.