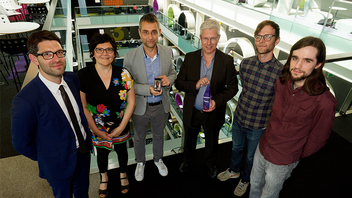 The EBU is pleased to announce that the EBU ADM Renderer (EAR) for Next Generation Audio is the winner of this year's EBU Technology & Innovation Award.

The open source technology was developed by an alliance of R&D and broadcast organizations – the IRT, BBC, France Télévisions, b<>com and the EBU Technology & Innovation department – and published as the EBU ADM Renderer (EAR) in March 2018. The specification will also be referenced in the work of the International Telecommunication Union.

The Award, now in its third year, is given in recognition of technology contributions that 'make a difference and create value' in broadcasting. It was presented to the winning team at the 24thEBU Technical Assembly, hosted by the BBC in Salford, Greater Manchester.

NPO's Egon Verharen, chairman of the EBU Technical Committee, said: "the EAR is a model for innovation by collaboration between R&D and broadcast organisations. It has the ultimate goal of helping to provide major new sound experiences for audiences"

Audio renderers such as the EAR receive and interpret Next Generation Audio (NGA) content, which is designed to deliver highly adaptable audio for immersive, more personalised experiences and access services, to a receiver. The EAR implementation, which is based on established and open standards and designed to be a reference platform for further development, facilitates creative innovation by allowing the broadcast community to explore and make use of the potential of the technology.

Michael Weitnauer, from IRT, who led the EAR project, explained: “The EAR is the missing piece in the puzzle of reliable NGA workflows and will accelerate the acceptance and adoption of NGA throughout Europe and the world. We are pleased and honoured to receive this award.“

The BBC's Chris Pike said: "NGA has the potential to provide better experiences for users, and the EAR will have an important role to play.”

Matthieu Parmentier, from France Télévisions, said that the EAR software illustrates what EBU collaborations are capable of. “It provides a key solution for Members and stimulates the broadcast industry as well”, Parmentier continued.

Paola Sunna, who coordinated the project for EBU Technology & Innovation, added: “This project demonstrated in a very short time what can be done when organisations work together for a common technical purpose.”

Tomorrow`s NGA technology will be capable of giving users a more immersive and personalised listening experience, and a greater choice of services. To make this possible, the broadcaster transmits ‘sound elements’. These are the combination of the sound and the information (‘metadata’) about what kind it is, and where it should appear to the listener to come from in the room. The ITU Audio Definition Model (ADM) is a set of agreed grammar and format rules for the metadata.

The NGA receiver translates (‘renders’) the sound elements, including metadata conforming to the ADM rules, to that needed for the arrangement of loudspeakers in the viewing room, or to generate an appropriate headphone mix. There are a number of different technical specifications for NGA coding, though they all are based on common principles. The purpose of the EAR is to provide an open and accepted renderer that can be used by all who wish.