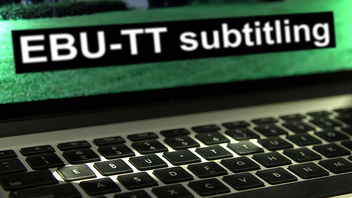 The MPEG-DASH Industry Forum has released v1.5 of the dash.js reference player. Its new features include support for the EBU-TT-D subtitling format. The new release will greatly help implementers to include EBU-TT-D support in their products. The relevance is not limited to MPEG-DASH, though, as the code can also can help implementers of subtitles in other players.

EBU-TT-D (EBU Tech 3380) specifies an XML based format for the distribution of subtitles. It is based on the W3C Timed Text Markup Language 1 (TTML1).  One main requirement underlying the format’s specification is that EBU-TT-D should be easy to stream with existing technologies, such as MPEG DASH. The EBU has defined DASH carriage details here. EBU-TT-D has been created by taking into account expertise from users, distribution parties, hybrid TV organizations and CE manufacturers.

The EBU has released a new version of the related EBU-TT 'part 1' format (EBU Tech 3350), which is aimed at the exchange and archiving of subtitling in media production operations. The v1.1 release makes sure that EBU-TT-D documents now are EBU-TT part 1 conformant and it defines new metadata in support of usage requirements submitted by the UK's Digital Production Partnership (DPP).

The EBU is organizing a series of subtitling related activites for IBC visitors, including a vendors tour, presentations on the new formats, including EBU-TT Live, and several meetups. See the programme here.

EBU Member IRT (booth 10.F51) is showcasing EBU-TT-D in HbbTV and BBC R&D (booth 8.F14) is providing a demonstration of a responsive approach to the display of subtitles.