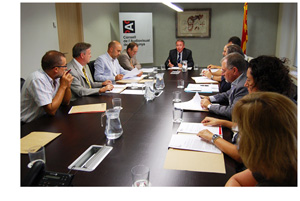 A working group led by the Catalan Audiovisual Council (CAC) has created a self-regulating code that means the EBU Loudness Recommendation R 128 will be applied to all TV broadcasting in the Spanish Autonomous Community of Catalonia. Signatories to the code include all public, private and local broadcasters in the region, as well as other interested organisations.

The new code is a pioneering initiative in Spain, where the responsible body at a national level, the Technical Forum of TDT (Televisión Digital Terrestre), has a working group investigating the possibility of wider adoption of R 128. The TDT group is also a participant in the Catalan Audiovisual Council. The CAC initiative is in line with the trend towards Loudness normalization throughout Europe, with R 128 now applied in France, Germany, Austria, Switzerland, the Netherlands, Belgium and, on DAB radio, Norway.

The CAC working group was created in response to complaints from viewers about sudden changes in volume on television. With all broadcasters now agreeing to normalize their audio to the recommended level of -23 LUFS, such sudden volume jumps should be a problem of the past.

One of the CAC's functions is to promote the adoption of self-regulatory standards within the audiovisual sector. A monitoring committee has been established to oversee the implementation of the new code and ensure that it is being complied with.

Loudness in the Tech Review

An overview of Tech 3344, the Loudness Distribution Guidelines, has just been published in the EBU Technical Review. Click below to download the article, by Richard van Everdingen.

The EBU's PLOUD group, which developed R 128, will hold its next meeting in Vienna on 3-4 December. The first day will focus on Loudness and Radio. All broadcasters with an interest in radio are invited to attend.