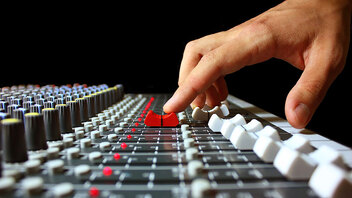 The BBC's Director of Television has welcomed the UK's new common technical standard for audio, which was published last year by the Digital Production Partnership and is based on the EBU's Loudness recommendation R 128. In his keynote speech at a BBC Academy event last week, Danny Cohen (below left) said that the BBC and other broadcasters must pay more attention to the comments and complaints of the audience when it came to issues of sound.

“The adoption of R 128 will solve our loudness issues," he said.  The installation of new meters to replace the now obsolete PPM (peak programme meter), and the retraining of technical and creative operators so that they could use them effectively, would be required for this “major paradigm shift to loudness mixing."

A large part of the day focused on briefing the audience on the industry’s new delivery requirements for audio. Aside from adopting R 128 to address loudness issues around volume jumps at programme junctions, the requirements also target audibility issues. "New recommendations about the relative levels of foreground speech against background music and effects", Cohen continued, "will provide an unambiguous framework for protecting the audibility of our dialogue."

Following the keynote, a panel session with ORF's Florian Camerer (above right), who leads the EBU's Loudness working group, and the BBC’s Andy Quested and Mike Armstrong further discussed the issues of moving from the world of the PPM to the new landscape of loudness.

Opinion: Why IP networks and data management are the top priorities

Trends in both content and the technology used to deliver and consume it point to some key focus areas for public broadcasters in the coming years, writes...

Two new EBU reports (EBU TR 063 and 064) conclude that a 5G Broadcast system could be safely introduced alongside existing DTT in the contested UHF band,...