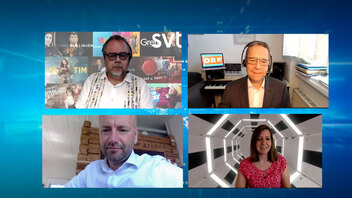 The 27th EBU Technical Assembly was hosted online, live from Geneva, on Wednesday and Thursday this week. Summing up the first day of the event, EBU Director of Technology & Innovation Antonio Arcidiacono said that two things had come across loud and clear: innovation is alive and well for public service media, and collaboration is the key to future success.

The opening keynote came from Svergies Radio (SR), explaining the central role of collaboration within several AI-related projects. Whether for SR's participation in EBU projects such as PEACH or the News Pilot, or for internal efforts using AI to enhance news workflows, working in multi-disciplinary and transversal teams has been critical to the success they've had. Indeed, it was collaboration between editorial and technical staff that drove SR's "News Values" project, named later on Wednesday as the winner of the 2021 EBU Technology & Innovation Award.

The morning's second keynote came from Simon Parnall of the UK media regulator Ofcom. He noted that a migration to IP-based distribution across Europe will be driven by a range of forces, not just economics, and it will be a long process. If there is to be a gradual managed migration to IP, in which all viewers continue to receive the services they value in the best quality, while also having the opportunity for new experiences, such as those opened by object-based content, then a truly hybrid approach will be needed. A truly hybrid media device will be able to move seamlessly between sources – broadcast or broadband – even within the same channel or content stream.

Collaboration came up again on Day 1 during a panel discussion on future innovation drivers. BBC's Laura Harrison pointed out that, with the democratization of content and technology, the EBU's work to facilitate collaboration, sharing and standards is needed more than ever. SVT's Markus Sterky observed that the use of online meeting systems over the past year had facilitated the emergence of much more collaborative models for meeting and engaging. He stressed the need for EBU Members to work together "to build trust and understanding form the different perspectives".

Innovations from EBU Members came into focus during the afternoon of Day 1, and not only with the announcement of the T&I Award winner. The "proud to present" session featured three inspiring projects: SVT's self-developed transcoder engine Encore (now available in open source), Yle's system for automatic extraction of attractive thumbnails for use on its online player, and France TV's implementation of an entirely new approach to generating and managing programme metadata across the whole organization.

The afternoon keynote session looked first at the cloud, with Chris Johns of Sky setting out how the company now aims to 'think cloud' by default, with the ultimate goal of bringing all of its capabilities into a unified workflow. He was joined by Rich Welsh, who said that SMPTE is looking at the entire ecosystem to develop a framework that can move the industry forward with cloud.

Michael Zink of WarnerMedia presented the day's final keynote, in which he made a case for totally reimagining how narrative is handled when producing immersive media. Referring to the concept of the Storyplex, put forward by director and author Stephanie Riggs, he outlined the foundational technologies that will make this new world possible: Mixed Reality, Photogrammetry (creating point clouds), AI and ML, Human–Computer Interfaces (HCI), and 5G and Edge.

While the wider EBU community was welcome to join Day 1 of the event (and Members can watch videos of the presentations on demand), participation on the second day was limited to members of the Technical Assembly. There was detailed reporting from the EBU Technology & Innovation department as well as from the chairs of the Technical Committee's various strategic programmes. A series of breakout discussions covered diverse topics including UHD strategies, 5G in production, automation of accessibility services, and more.