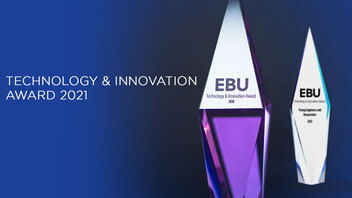 The winner of the EBU Technology & Innovation Award 2021 is Sveriges Radio (SR), for a project that puts public service values at the heart of news production and delivery. The winner of the inaugural EBU Young Engineers and Researchers Award is Irene Nikkarinen, a data scientist with Finland’s Yle. The announcements were made today at the 27th EBU Technical Assembly, hosted online live from Geneva.

The Swedish broadcaster won the EBU Technology & Innovation Award for its implementation of a novel approach to feeding the algorithm used to generate its news playlists. The “News Values” project ensures SR listeners hear the most important news of the day while also finding items that surprise them and broaden their knowledge and perspectives.

“This is a perfect example of technical ingenuity being combined with public service values, helping Sveriges Radio to better fulfil its mission,” said Judy Parnall, Chair of the EBU Technical Committee. “It puts technology at the service of both the editorial experts at SR and the audience at large, keeping humans at the centre of the process.”

“Our adjudication panel had a tough task to select one project from among the 24 nominated this year,” said Antonio Arcidiacono, Director of the EBU’s Technology & Innovation Department. “Our Technology & Innovation Award is going from strength to strength as a showcase of the creativity and technical talent found throughout public service media in Europe.”

Launched in 2019, the News Values project has been progressively rolled out across editorial teams at SR, starting with the 26 local news desks around Sweden. Editors rate every news story on three dimensions: magnitude, life span and, crucially, the degree to which it embodies “SR values”. In this way, every item gets a score that is used by the algorithm to automatically generate news playlists for each local SR station. The system is also used internally by the national news team to discover the most interesting stories from around the country.

The rating of news stories is done by digital editors on the local news desks in 26 local stations. This is based on the strong belief that the editors who sit closest to the production and to the local audience are best at assessing the news values. This spring, the system has been extended to the national news department, with the specialized newsrooms for sports, culture and science to follow.

SR’s News Values project was selected from among four that were shortlisted for this year’s EBU Technology & Innovation Award. The other finalists were:

The EBU Technology & Innovation Award has been presented every year since 2016. Candidate projects are submitted by EBU Members, with a total of 24 projects nominated this year, the highest total so far. The judging panel, comprised of the members of the EBU Technical Committee, assessed the projects independently according to fixed criteria. They could not vote for entries from their own organization.

The winner of the inaugural EBU Young Engineers and Researchers Award was also announced at the Technical Assembly today. The prize is designed to highlight and encourage young talent – graduates and young professionals, individuals and teams – working at EBU Members.

The first winner of this award is Irene Nikkarinen, a data scientist with Finland’s Yle. With the company for less than a year, her work on adapting and training an open-source metadata tool is improving the findability of Yle content on its online platforms and apps. Following her studies at the University of Helsinki and the University of Cambridge, she worked for a short time at a commercial company. The opportunity to serve all Finns with the results of her work was an important criterion in her decision to join the public service media company.

“Young engineers have always aspired to work at public broadcasters, which has contributed to our strong record in technology innovation,” said Judy Parnall, Chair of the EBU Technical Committee. “We must ensure that we continue to offer opportunities for innovative work that can make a difference for society.”

“We created this award to shine a light on the young tech talent that is found throughout the EBU membership,” said Antonio Arcidiacono, Director of the EBU’s Technology & Innovation Department. “Irene Nikkarinen is a perfect example of the kinds of profile that will ensure public service media remain at the cutting edge when it comes to innovation in media technology.”