Live production in the cloud – learning through collaboration 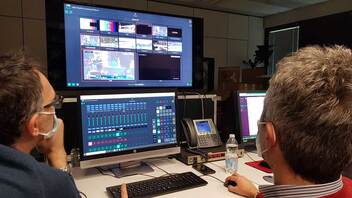 Colleagues at Rai participating in a cloud-based production test during the Biathlon World Championships, January 2021

COVID-19 gave a boost to the use of the cloud for media production. For post-produced content this is relatively straightforward. For live production it is a serious challenge.

While office workers and families at home have become reasonably used to working, teaching and learning via Google Meet, Zoom and the like, professional live productions are much more difficult to ‘cloudify’ because they require more real-time interaction with strict timing constraints. Indeed, a survey performed by the EBU Hybrid & Cloud Production (HCP) group last September confirmed cloud production workflows to be the number one challenge for broadcasters.

Since September 2020, EBU Members have regularly exchanged cloud production experiences in biweekly group calls and dedicated roundtable sessions. In the latter, frontrunners present their latest learnings, triggering a subsequent conversation between the participating Members. The presentations are recorded, so those who missed a session can watch it later on. So far, experiences from BR, RTBF, RTÉ, VRT and Yle have been shared, providing insights into innovative production approaches for both television and radio.

Solution providers can currently be divided into two main groups: cloud infrastructure providers and providers of ‘applications’ that run on top of the cloud infrastructure. A further subset of the latter are companies with strong broadcast expertise, that are effectively creating the cloud equivalent of what used to be hardware products (like video switchers). At the other end of the spectrum we find ‘digital services’ companies, where the emphasis is more on interfaces and workflows. The business model for all of them is a subscription and/or pay-as-you-use-it model.

The third activity of the HCP group consists of a number of hands-on trials in which Members and vendors test cloud-based live production set-ups. The first one was organized last month, for the Biathlon World Championships 2020 in Antholz. The EBU, Eurovision Media Services, Finnish broadcaster Yle, Italian broadcaster Rai, Grass Valley, and Simplylive worked together to test cloud-based live production technology during the Biathlon World Championships in Antholz (Italy). For this test, the focus was on the backhaul of six feeds: three different main programme feeds and three additional remote-controlled PTZ cameras at the shooting range and an interview location.

The signals were received in Geneva, Helsinki and Turin, with Yle and Rai staff validating the reception in their broadcast centres using, respectively, Simplylive and Grass Valley’s AMPP production tools. The set-up was intended as the precursor to a larger trial where special attention will be paid to remote control of the cameras, audio, remote commentaries, and graphics integration.

More tests are being planned for 2021.

This article was first published in issue 47 of tech-i magazine. 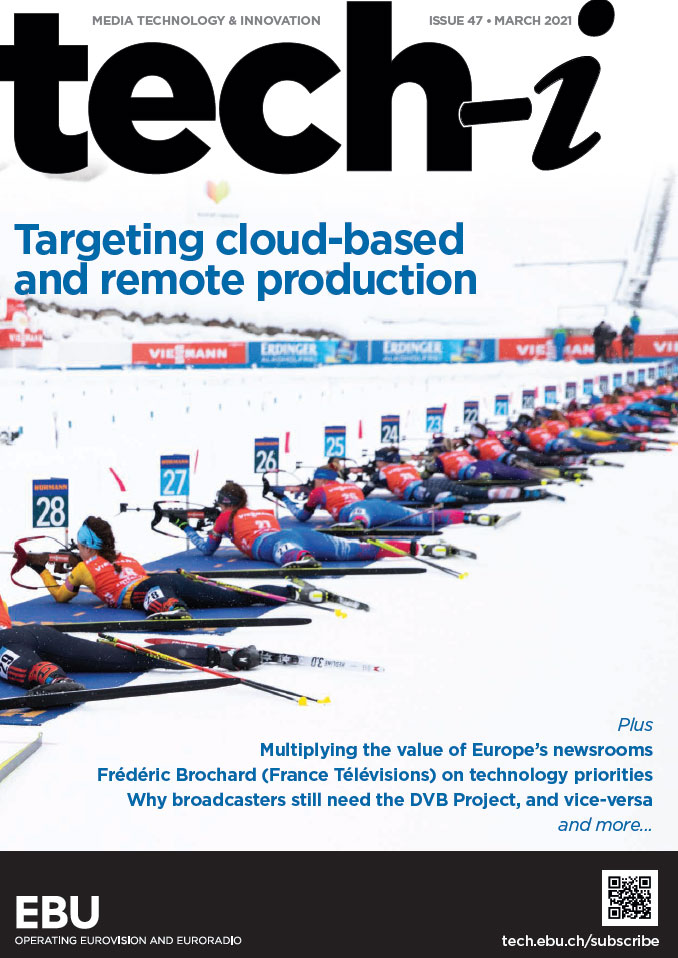 The EBU group on Hybrid and Cloud Production has over 150 EBU Member participants. The group is led by Conrad Gouws (RTÉ) and Markus Ostertag (SWR), with Ievgen Kostiukevych and Frans de Jong of the EBU T&I team coordinating. The group meets ‘in the cloud’ every second week. Besides continuing the roundtables series (with Members and vendors) and trials, the group is working on a report with use cases, requirements, etc.

Nominations for the EBU Technology & Innovation Awards 2021 will close on 14 April. We've been looking back at the projects honoured in 2020, when NPO's...

With nominations still open for the EBU Technology & Innovation Awards 2021, we continue our series on the projects honoured in 2020. There were three...

To mark the opening of nominations for the EBU Technology & Innovation Awards 2021, we're looking back at the projects honoured in 2020. A newly created...

BroadThinking 2021: how broadcasters' online services are meeting the SVOD challenge

This year's BroadThinking conference focused strongly on how broadcasters – and particularly public service media – can survive in a world where global...