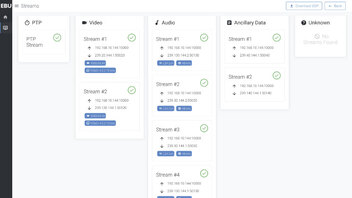 It is very hard to know and to grasp what is going on in an IP network in a media facility. One cable no longer represents one signal. The well-known “black and burst” and SDI are replaced by PTP (Precision Time Protocol) and Live IP. Early proofs-of-concept and the first fully fledged, up-and-running IP-based facility in Luxembourg all confirmed the need for tools to help understand what exactly is going on in the Live IP network.

The EBU Technical Committee’s Workplan included the goal of developing a test and measurement regime for IP in live production. In the meantime, the EBU had been actively participating in the work that resulted in the SMPTE 2110 standard for elementary streams in managed IP networks. Suddenly the stars aligned: an identified need for test and measurement in Live IP networks and deep knowledge about the upcoming standard.

Having needed to understand the emerging standard in detail, we were ideally placed to build a demonstrator in Python to check a few core parameters of the specifications. During the interoperability tests organized by the JT-NM (a joint effort between the EBU, AMWA, SMPTE and the Video Services Forum), we were more or less the ‘watchdog’, to confirm whether senders/streams were behaving well.

A Python script is a nice thing. But when the interoperability test scaled to more than 50 vendors, many bringing multiple pieces of equipment, something more powerful was needed. Together with our go-to IP expert Pedro Ferreira and his team at bisect, we started building a C++ optimized version of the Python script. Once the base of the code was ready, there was plenty of flexibility to extend and adapt. The result is an open framework with ‘workers’ to decode all the needed details. If a new standard arises, a new worker can be plugged-in to the framework.

The most important part is the fact that we abstracted away all the complexity of needing to understand the smallest details. A graphical interface helps the user to understand the state of the link being monitored. It gives an overview of the number of streams and automatically detects the type of stream (PTP, video, audio or ancillary data).

We began to realize LIST (as our Live IP Software Toolkit is now known) could be very helpful during the vendor selection process, the project deployment/debugging phase, or even just to start learning about the technology to be used in your future Live IP facility. At NAB 2018, we presented a white paper and were asked to demonstrate our tool at the IP showcase.

We have also made the code publicly available on our website. We understand that it can be hard to find an engineer who will be able to compile the code (software developer), understand how use it in your network (network/IT engineer) and analyse the results of all the tests (broadcast engineer). For this reason, we plan to provide ‘containers’, with an easy script to deploy.

We’re not there yet but LIST has the potential to become a Live IP distributed monitoring system. We strongly believe such a need will arise the first day you install a Live IP system. We’ve taken this project as far as we can with the available budget. By using the tool and giving feedback you can help the EBU community to bring LIST to the next level. Further development is in your hands!

This article was first published in issue 37 of tech-i magazine.

The user base of the EBU PEACH recommender system keeps growing, with Swedish Broadcaster UR now also putting the engine at the heart of its online offering.

PTS event to connect the physical and virtual

“For the first time in a long time, the technologies that are capturing the industry’s imagination have the potential to fundamentally change the way media...