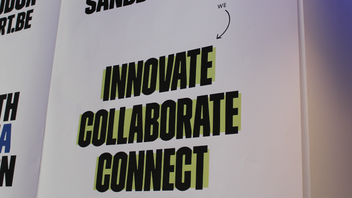 Dieter Boen explained how VRT's innovation funnel is structured, with different mechanisms all oriented towards undertaking real-world projects, rather than studying problems in labs. "We know that knowing and learning something is important, but the only way you can change your company is by doing things…doing a lot of things."

VRT's three main innovation mechanisms are VRT Innovatie (technology-driven), VRT Sandbox (market-driven) and VRT Start-up (consumer-driven). The goals of all three are mapped onto the organization's overall mission to inform, inspire and bring people together. A key success factor for all three is to involve the channel's brands from the very start.

VRT Innovatie is the R&D team that focuses on big international development projects. While it is technology-driven, a core strategy has been to reduce the focus on investing in platforms and put a stronger emphasis on investing in people and places.

VRT Sandbox was created to match media technology start-ups with real VRT productions. The start-ups are given an opportunity to work together with a specific VRT programme or product, with the Sandbox team facilitating the collaboration. While no money changes hands as part of the process, the development opportunity (lasting four months) and increased visibility are valuable for the start-up in question. VRT's brands and programmes get opportunities to keep up with the latest developments in digital platforms and services, helping them to remain relevant as audience needs change.

The Sandbox has extended its brief to also harness ideas that come from within the organization through an "intrapreneurship" programme. In such cases the staff members who come up with the ideas initially work on them in their own time. Ideas with sufficient potential may receive investment from a VRT production for further development.

Such has been the success of the VRT Sandbox that it now serves as a model for a European network of sandboxes. The Sandbox Hub is part of the EBU-led MediaRoad project, an EU Horizon 2020 initiative. Although it has been running for less than a year, already six other EBU Members have implemented media innovation accelerators with support and guidance from VRT.

The third prong of the VRT innovation funnel is VRT Start-up, an internal start-up for digital development. With four full-time staff, VRT Start-up links media trends to audience needs, aiming to bring VRT’s brands into closer contact with each user. They translate new insights into formats, media products and working methods; but they also go further, building and testing prototypes in co-creation with users and creative talent.

In addition to learning about the different innovation mechanisms, IOI participants also heard from several of the external start-ups and internal projects that have emerged over the last few years.

A further IOI themed visit will take place in the autumn. EBU Members who wish to follow the work of the group are encouraged to join IOI via the group homepage.