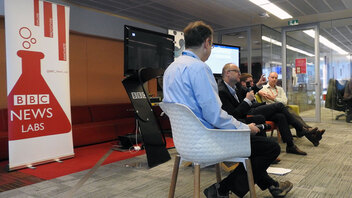 “Innovation isn’t easy, particularly in organizations under financial or competitive pressure, which is the case for most EBU Members. But it is important. It’s neither optional nor marginal. It needs to be central.”

These were the words of James Montgomery, digital development director at BBC News, at the end of a two-day visit to BBC News Labs by members of the EBU Integrated Media Production Strategies (IMPS) programme.

The visit, which came as IMPS prepared to transform into a new programme that will focus on Flexible Content Production, was designed to address the question of how EBU Members should “do innovation”. How can they take innovation from the lab into daily use? And how can they change parts of their organization to ensure that the whole organization is better placed to survive?

BBC News Labs has been set up differently to other R&D approaches, sitting across three different departments and acting as “the prow of the R&D ship”. Jointly managed by a journalist and a software engineer, it sits at the interface of BBC News, the Products & Systems division, and Research & Development.

BBC News Labs functions as an incubator, with more than 20 projects running concurrently at any one time. IMPS participants learned about some of the projects that have benefited from being in this “fuzzy” space where small, multi-disciplinary teams can quickly develop prototypes without undue interference from management. Team members are removed from day-to-day responsibilities while they work on the projects, but they are deliberately located directly in the newsroom, among the people who will ultimately use the tools they are developing.

Controller of BBC Research and Development emphasised the importance of News Labs provides this "safe space". He stressed, however, that their work is nevertheless like any other business unit: "Have you got anything through to live use?"

One project that has benefited from the safe space in News Labs is ALTO, a virtual voice-over tool that uses text-to-speech analysis to re-version video content into multiple languages. As of October 2016 is has been put into day-to-day use by World Service teams and is set to be fully handed over as of February 2017.

OPPORTUNITIES TO BE INNOVATIVE

ALTO emerged from a creative challenge issued to staff by the controller of BBC World Service a couple of years ago to find a way to inexpensively increase the service’s output. Susanne Weber, a technical operator for sound with a love for linguistics, came forward with an idea and was given the opportunity to turn it into a proof-of-concept, which then went on to become an official News Labs project. 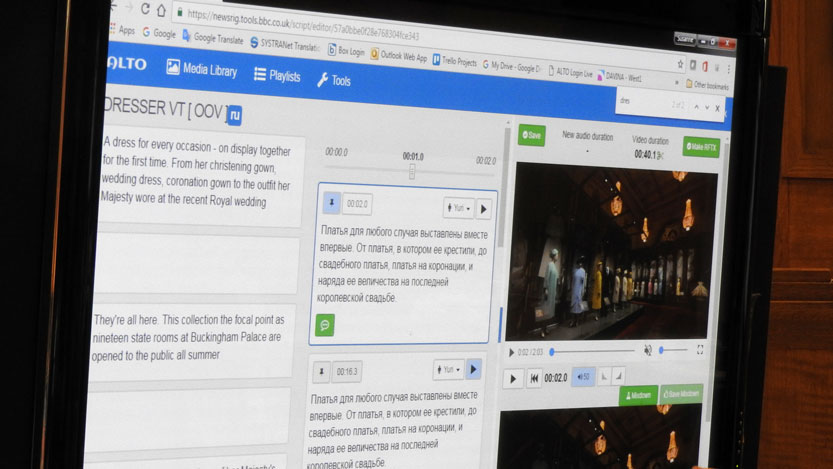 The ALTO project bears all the hallmarks of successful innovation as practiced at BBC News Labs: a small multi-disciplinary team drawn from different parts of the organization; an agile development process using fast prototyping, two-week sprints and daily stand-up meetings to track progress; and a clear goal of handing the product over to “business-as-usual” operation as quickly as possible.

For Susanne, who has been both the subject expert and project owner for ALTO, being part of News Labs for the duration of this project has, she feels, elevated her career. It is a clear illustration of principle that innovative organizations can attract and keep talented people because they offer opportunities to be innovative.

Among the other BBC News Labs projects presented to IMPS participants were explorations of how emerging Virtual Reality consumer technology could create new, immersive news experiences and Atomised News, adapting news stories to the devices and platforms used by 16-24 year olds. Both of these projects benefit from the natural eagerness of journalists to find innovative new ways of telling stories.

IMPS participants returned to their own organizations brimming with inspiration and ideas. The BBC News Labs approach seems to strike the right balance between providing space and time to innovate and a framework that ensures projects will either fail quickly (and thus reduce the risk of wasted resources) or succeed and go on to be transferred into operational use.

James Montgomery also said that innovation is “about being open, transparent and cooperative and sharing knowledge”. The EBU and its Members will benefit greatly from extending these same principles across the public broadcasting sector as a whole.

The follow-up to IMPS, a programme titled Flexible Content Production (FCP), will kick-off with a Network & Learn event at ZDF in Mainz on 27-28 March 2017. Information about how to join the new programme and its first visit will be made available to EBU Members in the coming months.

Both IMPS and the forthcoming FCP programme are jointly run by EBU Technology & Innovation and the Eurovision Academy.