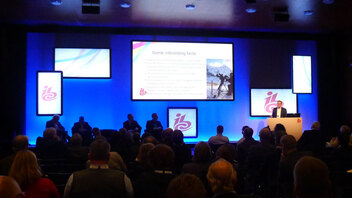 Some of the world's most advanced broadcast facilities will be in focus for the EBU session at this year's IBC Conference next month. Project leaders from seven public service media organizations will talk about the lessons they've learned in planning and building studios and broadcast centres that take advantage of the latest IP and cloud technologies.

The session is titled "Building Future Broadcast Centres – Bricks, Bytes and Behaviours", in recognition of the fact that these large-scale infrastructure projects go beyond questions related to the buildings themselves. New workflows and organizational challenges are equally important factors to consider, alongside technical and architectural elements.

EBU Director of Technology & Innovation Simon Fell will chair the session, which takes place on Saturday 16 September from 15:15 to 18:00 in the Emerald Room. A series of short presentations will be followed by a panel discussion. The full line-up of speakers is available from the IBC Conference website.

Bergen to Zurich via Montreal

Delegates will hear about projects at various stages of completion, from those still in the planning phase through to some that are fully operational. In the latter category are NRK's new facility in Bergen (shared with their competitor TV2) and BCE's new RTL City campus in Luxembourg. These projects are the source of valuable findings for the wider industry and help to identify gaps in the existing standardization landscape.

There will also be updates from projects that are still under construction or have yet to leave the drawing board. These include new IP-based studios in Germany (SWR) and Switzerland (SRG SSR, via its Technology and Production Center subsidiary) and the new headquarter buildings planned for Belgium's VRT and, in Montreal, CBC/Radio-Canada. BBC's Cardiff Central Square project will also be presented.

For any media organization that wants to face the future with confidence, it's an unmissable conference session. Register today.