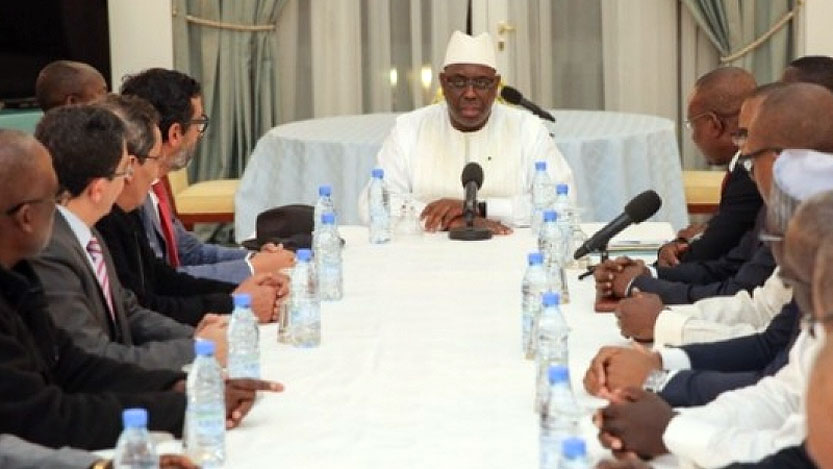 Senegal's President, Mr Macky Sall, receiving a delegation from the African Union of Broadcasting in Dakar on 24 February 2017.

At a series of events last week to mark the tenth anniversary of the African Union of Broadcasting (AUB), the EBU stressed the benefits of embracing digital terrestrial television (DTT). The celebrations brought together Directors General of African broadcasters, Presidents and Secretaries-General of other broadcasting unions, and key figures from governments and the media to explore how to promote authentic content in the African media.

During a round table discussion on content, how to reach the audience and the challenge of remaining relevant, EBU's Marcello Lombardo stressed the role of a strong regulatory environment in favour of local populations. Appropriate media laws are important to ensure that premium content remains accessible for all sections of society, he said. Furthermore, experience in Europe had shown that the universality and ease-of-use offered by DTT platforms brings increased audience share for public broadcasters.

One of the key messages the EBU brought to discussions and presentations during the AUB symposiums was the ongoing need to defend access to spectrum for broadcasting. Opening an EBU-hosted lunch during the General Assembly, Marcello Lombardo acknowledged that broadcasters had achieved significant success at WRC-15 (the ITU's World Radiocommunication Conference in 2015). However, he reminded attendees that the pressure on spectrum had not abated and that there is a continued need for broadcasters to work together. As the broadcast community works towards WRC-19 and WRC-23, successful DTT platforms would be the best shield against future attacks on spectrum.

The EBU was pleased to have the opportunity to participate in the AUB anniversary celebrations. It was an ideal occasion to share some of the experiences of European broadcasters, particularly with regard to successful DTT business models, opportunities for local content and premium sport content, and the national sovereignty that DTT offers over externally controlled satellite platforms.