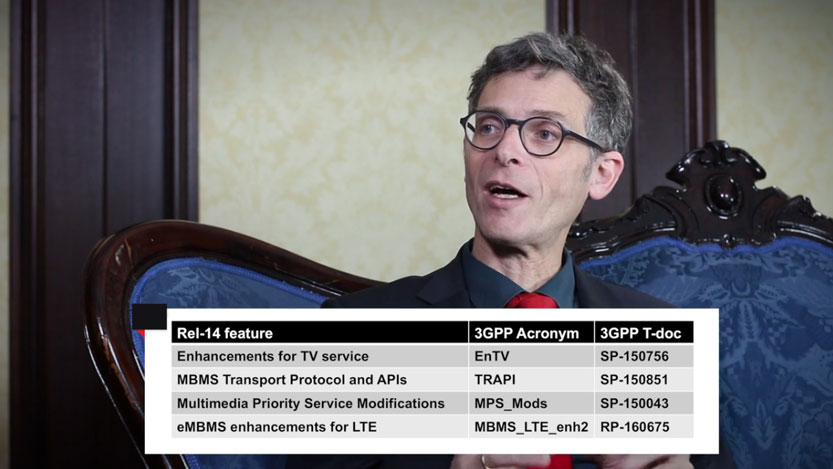 The upcoming 3GPP Release 14 will include a set of new features that will help to ensure that new mobile technologies – 4G as well as 5G – will be capable of meeting the future requirements of EBU Members. This positive outcome is the result of a joint contribution from the EBU and its Members to standardization efforts in the mobile industry.

Personal devices such as smartphones and tablets are increasingly popular for the consumption of media services. It is important for EBU Members to make their content, both linear and on-demand, available on such devices, but reaching them via mobile networks in a sustainable way is not straightforward. Challenges arise in relation to coverage, quality and ultimately the very high cost of mobile distribution.

The contribution of the EBU and its Members to 3GPP standardization processes, resulting in a very positive outcome, has been recognized and appreciated. Release 14, expected in June 2017, will include the following enhancements:

Erik Guttmann is chair of the 3GPP SA Plenary, an important committee in 3GPP, responsible for service and architecture aspects. In the video interview below, he sets out some of the key features included in Release 14. Speaking about the new broadcaster-related enhancements, he explains that the goal was "to identify which factors needed to be addressed and make as much headway as possible".

Work in 3GPP continues, in particular on further developing the TV service layer in LTE as well as broadcast capabilities in 5G. From the point of view of EBU Members, the main objective remains the same: to ensure that future mobile technologies are optimized for the needs of Public Service Media.

The EBU work is led by the Strategic Programme on Future Distribution Strategies, which seeks to address both technical and broader strategic issues.