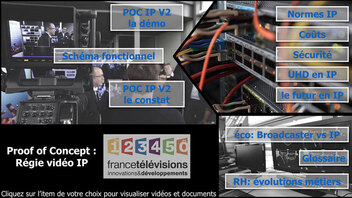 EBU Member France Télévisions has just published a multimedia report on their recently completed proof-of-concept around Live IP-based production. The report deals with different aspects of the evolution of broadcast production towards an all-IP environment, including questions of cost, security, training and standardization.

The PoC took place in October 2016 and was the second phase of a project that started in 2015. (There is a report on the outcomes of Phase 1 of the project in the current issue of tech-i magazine.) It ran in the Paris headquarters of France Télévisions and at Ericsson's Boulongne Billancourt location, with support from the consultancy 42 MediaTVCom.

The online report, which includes video interviews, schematic diagrams and a complete glossary, was produced by Edmond Debar and Xavier Deperthes of FTV.