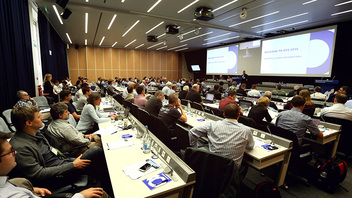 It was without a doubt the most successful EBU Network Technology Seminar ever. With 159 participants, 9 tutorials and 5 cross-industry demonstrations, Geneva was the place to be last week to take the temperature of the media industry's current 'fever': the transition to IP.

The good news is that this fever is a symptom of something that could provide a very fundamental improvement in the way media content is produced. The implications reach much, much further than replacing one type of network by another. As several presenters pointed out, this is the chance for broadcasters to face competitors in their own domain. The risk - as with handling any fever - is that the process will not be completed in time.

What is holding back quick standardization? NTS 2016 provided a few pointers to what can be improved:

Making sure media companies understand both the short and longer term benefits and challenges of 'going IP'. As François Legrand (CBC) pointed out: the short-term change of networking technology will open the way to extensive virtualization of production environments in the longer-term. So buyers of equipment should understand they are making a very strategic choice when specifying what standards their kit should adhere to. The majority of participants said they will be planning their first Live IP production study within 1-5 years from now, with most of the full IP production facilities expected to be coming online roughly 3 years from now or later. Add product development time and you get a good feeling for how urgent the issue is.

Education on the options

Clarifying what standards there are now, which ones are being proposed, and which products support which specifications. The presentations and tutorials at NTS 2016 showed there is a finite set of different 'alliances' and organizations standardizing IP production. But the specifications don't all operate at the same level and they don't all interoperate. Some are proprietary, others are real standards. Some are completely open and available, others require an NDA or a fee to be paid. Keeping track of what is what would help all users.

The good news is that there are signs that the standardization efforts are converging, especially the EBU Group on Future Networked Systems, the Joint Task Force on Networked Media and AIMS. And there seems to be a strong commitment from many manufacturers to the AIMS roadmap and to SMPTE 2110. With more joint power behind the same work, this could provide the desired standardization acceleration.