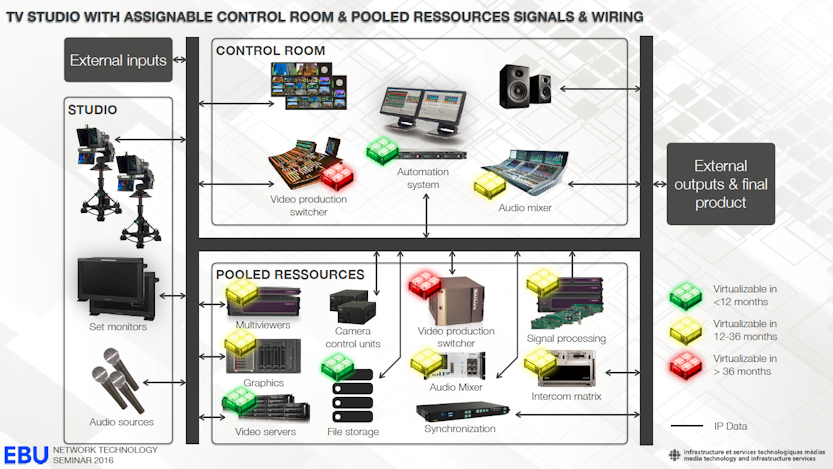 Slide from François Legrand's presentation giving an impression of how far we are from a fully virtualized production environment.
"What do media enterprises want?" This was the main question that François Legrand (CBC) asked in his keynote presentation at this year's EBU Network Technology Seminar. He answered his own question in detail and ended with a plea:  Let's call it "Legrand's 3-2-1 on IP".  Here we go...

"3 desires" which include: flexibility, agility and scalability

First of all, broadcasters expect new IP systems to be flexible; that means they must be able to adapt cost effectively in a given timeframe. Secondly, they demand (business) agility, which refers to solutions that can rapidly respond to changes by adapting their initial stable configuration. The third desire from media companies is to have infrastructures that can scale with increased workloads.
These requirements are not uncommon in the software world, but they do not fit well with the traditional broadcasting industry, which is strongly hardware-dependent (think of your vision mixer, for example) and built around highly specialized interfaces, such as SDI. This brings us to the second part of Legrand's answer.

"2 changes" to focus on: IP and virtualization

To achieve the desired benefits, we need to move from specialized hardware to virtualized software.  This will happen gradually, but it is the real IP revolution that is needed. It is called 'IP' because of a necessary first step that until now has received the most attention: the move from SDI to IP networks. But as Legrand explained, this first step is far from allowing broadcasters to benefit from the brave new IP world,. To do this, we will need to virtualize the complete technology stack and make it Commercial Off The Shelf (COTS) equipment friendly.
The picture above shows an estimation of where we are on the path to IP Nirvana. Maybe more important is for us to understand where we are compared to other industries. According to Legrand we are about two steps behind the IT industry, in general. What is cutting edge there is the move to hardware accelerated cloud platforms, while the media industry is only just starting to virtualize (see his presentation for more detailed examples).

"1 set of standards" that are: open and interoperable

How do we catch up? For Legrand, the main thing the media industry should do is approach the challenges together. The media market is too small for multiple, incompatible series of standards. Instead, it is better for us to focus on a common set of standards and make sure to benefit from the (75x) larger global IT industry. This may mean killing some of our darlings e.g. do we really need 'clean switching' for every purpose? Could we lose packages sometimes if we conceal the errors? And is a simpler videoscaler good enough if it saves processing time and energy?
In the audience there seemed to be a common understanding that the current standards divergence is not good for the industry. A few hours after Legrand's plea, a vendor representative from the other side of the world repeated it in a discussion session,  asking for the opening up (= making freely available) of the core SMPTE IP specifications (ST 2110). Let's see what comes next.