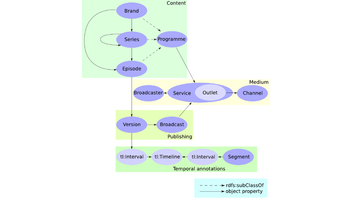 The EBU has been working with the BBC and Google to add extensions to the vocabulary used by search engines to categorize and describe TV and radio content. Schema.org is a collaborative effort involving all of the main web search engines. It aims to develop and promote the use of a shared markup vocabulary to help search engines understand the information on web pages and provide richer search results.

The latest release from schema.org includes adjustments to the existing vocabulary for media content and creative works, specifically improving the way TV and radio shows are described. For example, information like the following could be presented using the new markup:

Embedding such semantic data in web pages (using RDFa - Resource Description Framework in Attributes) means that it can be aggregated by search engines, which can then provide more information around TV and radio search results. It would also help with providing instant answers to queries such as 'when and where is the next Eastenders episode on?'.

Work on the new TV/Radio additions to schema.org has been led by the BBC's Yves Raimond, the EBU's Jean-Pierre Evain and Google's Dan Brickley.  It is included in Schema.org version 1.0d, published in November.

The work builds on previous efforts in modelling such information, such as EBUCore and the BBC Programmes Ontology and TV-Anytime. It represents an important milestone in TV and Radio content discovery on the web.