Making progress on diversity in technology teams and activities

Article in Issue 50 of tech-i magazine

How far have we come in our first year as members of BBC’s 50:50 The Equality Project? We targeted eight flagship EBU Technology & Innovation events, aiming to increase active female participation – as panellists, speakers or moderators – to 25%. We used the events from October 2020 to June 2021 as the benchmark. As of June 2022, we had achieved a 2-point increase: from 19 to 21%.

So, we are heading in the right direction. The 25% goal will remain in place for a further year, and we will continue to work hard when programming our events. EBU T&I remains committed to reaching out to female engineers and technologists to encourage them to raise their professional profiles at a European level and take part in technology dissemination.

The hard fact, however, is that certain fields have smaller pools of women working in them. This has a ripple effect in terms of gender balance in recruitment and consequently in participation in EBU T&I project groups and events.

Take cybersecurity as an example: according to World Bank figures, only 20% of cybersecurity professionals are women, owing to various cultural, societal and family constraints. Additionally, there are organizational and structural problems of wage gaps, delayed promotions, etc., which must be addressed to improve recruitment and retention rates for women. The statistics are even worse when it comes to software engineering, with a 2022 Statista survey showing that nearly 92% are men.

While we cannot change a whole ecosystem overnight, we can take steps in areas we control. One example of this is the recent creation of the Technology Think Tank focus group (see below), which should serve to increase diversity and representation in EBU T&I activities.

Our gender diversity action plan also has an education pillar, helping ignite change at grassroots level by showing young girls that science, technology, engineering and mathematics (STEM) fields are open to them. Since 2018, EBU T&I has participated in the International Girls in ICT (Information and Communications Technology) Day. Earlier this year, local schoolgirls came to the EBU for a fun, hands-on, interactive day that gave them an immersive audiovisual and engineering experience. They learned how to use software tools to record, edit and mix speech and music with EBU Euroradio’s Storyboard tool, which facilitates the distribution of audio on social platforms. One participant expressed an interest in a career in STEM and others were going to tell their friends about it, which can help create the necessary ripple effect.

We are now starting to work on the 2023 edition of Girls in ICT Day. Let’s see what next year will hold. And if you would like to partner up for future editions, just reach out to me.

As part of the EBU’s Diversity, Equity and Inclusion programme, the Media Department is also supporting women in STEM areas. A recent meeting on gender equality, hosted at RTBF in Belgium, included a focused session on this. It was great to see 40 EBU Members present and implicated in gender equality in PSM content. An RTBF initiative, coordinated by Paul Harrison, proposes to bring EBU Members together to coproduce a television series to raise the visibility of women working in STEM fields, targeting a young female audience.

The EBU’s new Technology Think Tank focus group was created in September 2022. Endorsed and supported by the EBU Technical Committee (TC), the group was born from the business requirement to address the challenges of PSM in a media world that is evolving at a fast pace and where understanding and reaching younger audiences is a priority.

This group of young women and men have been identified by the TC as the next generation of media-technology experts and leaders among EBU Members. Feeding into the TC, the group will explore trends, opportunities and challenges in media creation, distribution and consumption, also identifying potential areas for collaborative work among EBU Members.

An additional task for this group is to identify and propose changes that will more effectively bring the new generation of experts and leaders into the EBU’s technical activities. Chaired by Dominique Hoffmann, Head of Technology and Production at ARD/SWR, (Germany), the group includes:

This new pillar should enrich and support the ongoing and future activities of the T&I Department, the TC, and EBU Members, including in the area of Diversity, Equality and Inclusion.

This article first appeared in issue 54 of tech-i magazine. 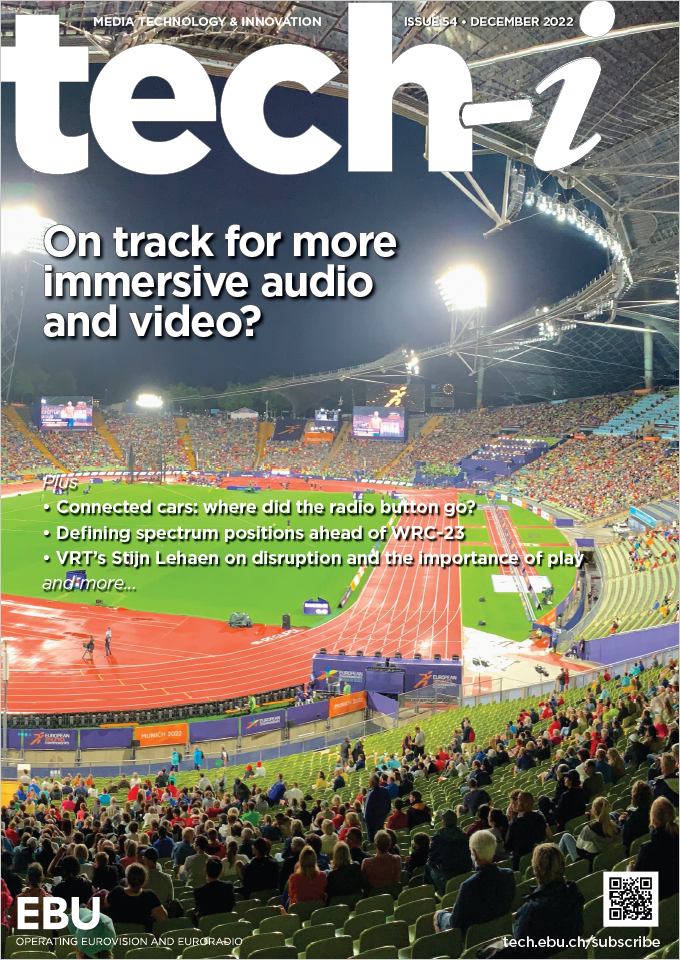