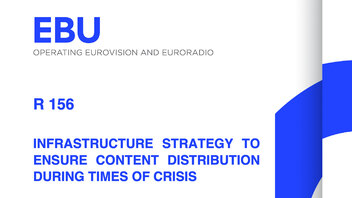 The EBU calls on national regulators and public service media to maintain multiple media distribution infrastructures in order to ensure service continuity and maximised reach in times of crisis.

Recommendation R 156 underlines that resilience is a benefit of the co-existence of multiple distribution platforms – including all forms of terrestrial broadcast, wired broadband, mobile and satellite – and that these technologies should be considered for their ability both to work independently from one another and to maximise coverage of a given population.

Robustness and resilience come at some cost, but the likelihood and cost of unexpected events and their consequences is frequently underestimated. It often takes a crisis to show us how vulnerable we are.

There is plenty of evidence for this in the past two years alone: from a global pandemic, to natural disasters such as floodings, hacking attacks on critical infrastructures, and war, in Europe.

Each one of these events has demonstrated the critical importance that rests on the public institutions’ ability to disseminate trusted information and warnings – and how the loss of such an ability can escalate a crisis and hamper an effective response. In several cases, one or several media distribution systems had been compromised.

If there’s one lesson the recent past holds then it is that in order to avoid the worst, it pays to prepare for it.