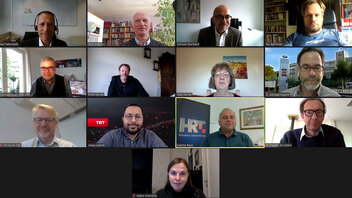 The 26th EBU Technical Assembly has elected a new Technical Committee and re-elected the BBC’s Judy Parnall as the Committee’s Chair, at the first of its annual conferences held entirely online, on 6-7 October 2020.

Michael Eberhard, from German broadcaster SWR/ARD, was elected as one of the two Vice Chairs. He joins Olli Sipilä from Finland’s YLE, who was re-elected to a second term as Vice Chair.

The Technical Assembly (TA) gathers high-level representatives from all EBU Members for an exchange on technical topics of great strategic importance to public service media. It elects a new TC in even years (such as 2020) and reviews the TC's new Workplan in odd years. Normally held in June, the Technical Assembly 2020 was delayed until October due to the crisis.

Members of the new TC

The 13 Member representatives of the Technical Committee (TC) shape the direction of the work carried out by the EBU’s Technology & Innovation department on behalf of the EBU Membership and through the collaborative Strategic Programmes and working groups coordinated by the department. The TC is elected for a two-year term.

At the Technical Assembly 2020, the outgoing TC also presented an updated version of its EBU TC Workplan 2019-21, which sets out goals for the Strategic Programmes and working groups. Notable revisions made at the midway point include a stronger focus on work to facilitate decentralized and cloud-based production, which has become a strategic priority for many broadcasters during the COVID-19 crisis. The new TC will present a new Workplan at the next Technical Assembly in 2021.

EBU a key contributor for ASBU Week of Technology

In line with its policy of supporting sister unions, the EBU is underpinning the Arab States Broadcasting Union’s Week of Technology conference with keynotes...

Reducing the cost and complexity of transcription and translation

Integrating multiple translation tools from multiple vendors into existing production workflows leads to added costs, over and above the usage fees for...

Shifting to OPEX through serverless and microservices

The EBU's Darko Ratkaj has been appointed chair of a new international working group that will review spectrum use and future needs for the UHF band. The...