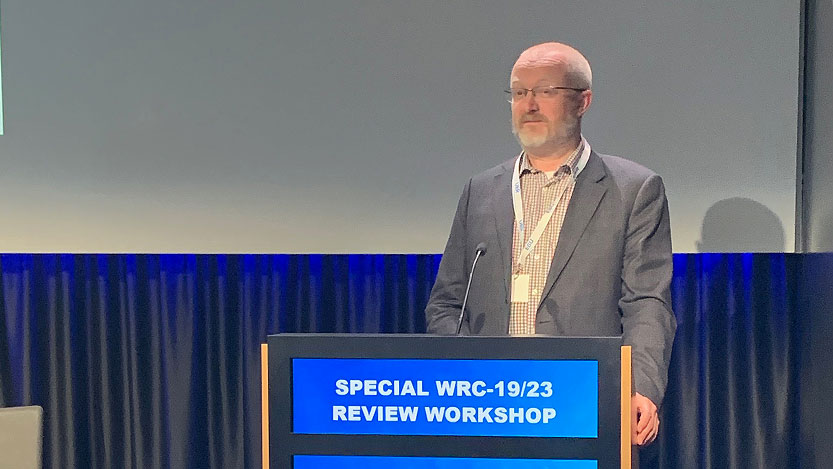 Following the World Radiocommunication Conference (WRC) and the first Conference Preparatory Meeting (CPM23-1) held in Sharm El-Sheikh last November, the broadcast industry has shown great interest in joining forces to prepare for the next WRC. The ‘Special WRC-19/23 Review Workshop’, hosted by the EBU in Geneva, 21 January 2020, did just that. Gathering 63 participants from EBU Members, commercial broadcasters, broadcast network operators and the PMSE (Programme Making and Special Events) community, the objective of the event was to define a roadmap of activities and to identify actions for the various stakeholders.

The event presentations are available to staff of EBU Member organizations on the Special WRC Review Workshop webpage.

The review of the UHF band

There was unanimity about the satisfactory results obtained at WRC-19, particularly in relation to the foreseen revision of the UHF band 470-960 MHz, the core band for DTT. The situation is flexible enough to accommodate a range of outcomes that match EBU Members’ individual situations. The CPM23-1 outcome was also positive in that it assigned the studies to be performed to a dedicated Task Group 6/1, which is under the leadership of the ITU-R group responsible for broadcasting services.

The workshop discussed the range of studies that are now to be performed, and highlighted the tight deadlines for the submission of first inputs. For example, the studies on spectrum use and spectrum needs of existing services (which includes DTT and wireless audio PMSE) are due on 15 May 2021 – and the same deadline applies for the submission of technical parameters and methodologies for the studies on the compatibility services to share the same spectrum. With just over year to go, preparation of the studies needs to start immediately.

The TG6/1 group will also need to define the regulatory solutions that satisfy national plans on the future use of the DTT band 470-694 MHz. The EBU Strategic Programme on Spectrum met immediately after the workshop to begin discussions about future PSM requirements for the distribution of their content.

Other bands of interest also under review

The conference also noted that there will be other bands under review at WRC-23 that may affect broadcast satellite services and PMSE. The allocation of additional spectrum to mobile services and to IMT (e.g. 4G or 5G mobile) will review certain bands affecting wireless video PMSE services, and the lower part of the C-Band, 3.6-3.8 GHz, which is extensively used by broadcasters for programme contribution and programme distribution. Although the band is already assigned to IMT in Europe, it is not harmonised worldwide. The use of High-Altitude Platforms as IMT Base station (HIBS) will also consider different bands which will potentially affect PMSE services.

Broadcasters are encourage to follow the studies on the use of IMT systems for fixed wireless broadband in the frequency bands allocated to the fixed service. It is still to be agreed which bands will be affected, but one that it is in the top of the list is the Ku Band 10.7-11.7 GHz, the core band for Direct-to-home (DTH) distribution of radio and television services over satellite, and a band heavily used for Satellite News Gathering, TV contribution and occasional-use services.

The workshop concluded with a list of actions for the broadcast community, and with a view to the tight schedule, work has already started. There is an enormous amount of work to be done, and coordination between the various stakeholders will continue via joint working groups, to ensure that all activities are covered.

Find out more and get involved

EBU Members are encouraged to join the EBU Strategic Programme on Spectrum group.

Presentations from the 'Special WRC Review Workshop' in January 2020