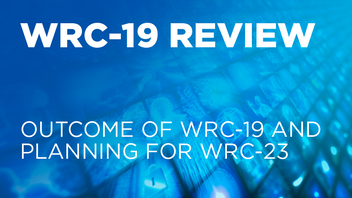 The World Radiocommunication Conference in 2023 will have a significant impact on the future of the broadcast delivery of media services and PMSE services that are used for production of audio-visual content, news and events.

Work to ensure that the needs of media production and distribution are met is as important as ever: At WRC-15 it was agreed that in WRC-23 there would be an agenda item to review the 470-960 MHz band and to consider possible regulatory actions in the frequency band 470-694 MHz in Region 1, as appropriate. WRC-19 has confirmed this agenda item.

Summary of decisions at the Radiocommunication Assembly RA-19, 18-22 October 2019 Summary of decisions at the Conference Preparatory Meeting CPM23-1, 25-26 November 2019 Positive outcomes for broadcasters at WRC-19

EBU seeks the best solution for broadcasters at WRC-19