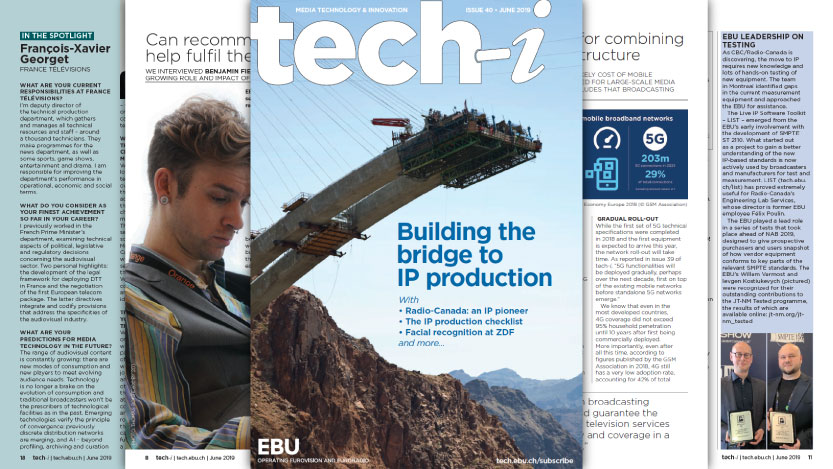 Issue 40 of the EBU's quarterly magazine tech-i is now available. When the magazine first appeared ten years ago, the idea that live production could be done with equipment connected only over IP networks was nothing but a pipe dream. That dream has now become a reality ...almost!

While the shift to IP-based production infrastructures is well under way, there are still some gaps to be bridged. Much progress has been made, especially by pioneers like CBC/Radio-Canada. Executive director of engineering solutions François Vaillant sets out some of the lessons his team has learned in planning and building Radio-Canada's new HQ in Montreal. (pp10-11)

"IP is no longer a choice – it has emerged as the only option. For us, we were either the last broadcaster on HD/SDI or one of the first to go IP. We chose the latter."

The EBU, with considerable support from its Associate Member CBC/Radio-Canada, has been working to clearly define which parts of the full stack solution still need to be completed. The IP checklist – or Media Node Maturity Checklist, to give it its official title – republished in this issue of tech-i, is designed to help broadcasters and system integrators to define and design their requirements, but also to encourage the vendor community to deliver full stack solutions.

The case for live IP production is also made by both Antonio Arcidiacono and David Wood in their usual columns.

In addition to the above articles, the regular Partner Profiles feature comes from AMWA, the Advanced Media Workflow Association (p17), while Technical Committee member François-Xavier Georget (France Télévisions) is "in the spotlight" (p18).