PTS 2019 looks at the big picture with UHD, AI, IP and Cloud 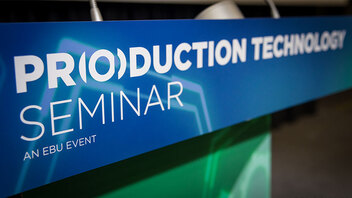 Videos and slides from the presentations and tutorials can be accessed by employees of EBU Members and event participants on the PTS 2019 website. Login is required to see and access this content.

"Revolutionize Media" was the strapline for this year's EBU Production Technology Seminar. However, while several potentially revolutionary technologies were discussed, the main messages on the key topics arguably leaned more towards evolution than revolution: we're not quite ready for UHD with all potential image enhancements; fully virtualized production is not yet a realistic option; IP will soon be the dominant production infrastructure but there's still a lot to be done; and AI can currently be used only for a limited set of tasks. PTS participants also participated in subjective tests of HFR picture content and AI-based QC, and got to inspect TPC's "UHD-1", the first ST-2110-based OB van in Europe.

Last summer's live UHD-HDR-HFR-NGA production at the European Athletics Championships demonstrated that such productions are possible, but it also showed how much work still needs to be done. IRT's Dagmar Driesnack reported that more HDR production experience is needed and that a backwards-compatible distribution method is required for HFR.

Sony's Ikuo Tsukagoshi later provided an overview of recent research on the potential of using frame-blending techniques to allow HFR and non-HFR devices to co-exist in harmony.

Subjective video quality tests are almost always on the agenda at PTS. This year the EBU Video Systems group took the opportunity to compare the quality of HFR content from the European Athletics Championships at HD and UHD resolutions. The results, based on around 30 evalutions, showed that more than one point on the (ITU-R BT.500) quality scale can be gained by moving from 50p to 100p. The result holds regardless of the resolution (HD or UHD) and the shutter angle (180 or 360 degrees). The display used was a state-of-the-art 100 Hz capable 65” OLED display. For this test all internal processing was turned off. More testing is needed to quantify the impact of motion interpolation in the CE display.

While more details on the tests will be published in due course, an initial conclusion in terms of resolution was that distributing in 2160p does not deliver a significant improvement compared to 1080p. More testing is required to evaluate the impact of distribution bitrates. A consensus seemed to be emerging, however, that producing in 2160p and distributing in 1080p to UHD-1 displays would provide an attractive high quality broadcast chain. And always with HDR.

"Almost everything is possible in the cloud right now, but only by very few." These were the words of Brad Gilmer, who said that only large broadcasters with deep pockets could currently make fully virtualized, cloud-based production work right now. He observed that broadcasters are choosing to build very close relationships with their chosen vendor to gain competitive advantage over their competitors: "lock-in by choice" was the phrase he used.

He said that having in-house development capabilities is essential, but also recommended that further work be done by EBU Members on identifying potential shared user requirements for cloud production.

The potential for AI to help at all stages of the production chain was flagged in several presentations. IBM's Thomas Ross stressed the importance of remaining in control of the AI that you use: "This means understanding what it produces and why it produces it."

Jouni Frilander, while providing several examples of where Finnish broadcaster Yle uses AI as part of its production workflows, identified two trends that prevent more effective use of the technology for now. Current production systems, he said, don’t have much AI built in yet, even if there have been some positive developments. Secondly, production processes can slow down adoption of AI, because they haven’t been planned for end-to-end metadata flow.

Full speed ahead for IP

The new IP-based OB truck developed by tpc for the Swiss public broadcaster SRG, the world's first to be based on the SMPTE ST 2110 standard, paid a visit to the EBU during the conference. It gave delegates a chance to see for themselves how live IP production has become a reality. Being ahead of the curve meant some compromises had to be made: the unavailability of the NMOS standards for device discovery and registration meant keeping track of the 500,000 IP addresses needed to run the truck in an Excel spreadsheet!

The experience gained through getting its new OB truck on the road is proving invaluable for tpc in developing its new all-IP building in Zurich. PTS delegates heard further evidence of the progress towards IP-based production with an update on the new Maison de Radio-Canada. François Vaillant, executive director of engineering at Radio-Canada, shared many lessons learned so far. Among them were the fact that preparation of RFPs took up took four times longer than usual and OpEx costs are expected to 8-10 times higher with IP compared to SDI. He stressed that ST 2110 solves only some of the issues and recommended careful study of the EBU's Pyramid of Media Nodes to get a more complete picture.