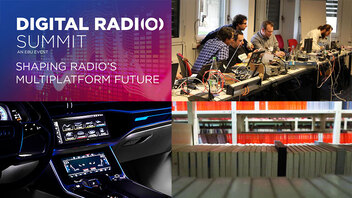 Videos and slides of the presentations given at the EBU Digital Radio Week can be accessed by employees of EBU Members and event participants on the Digital Radio Summit and Radio Archive Workshop's websites. Login is required to see and access this content.

After a packed series of events in the EBU's Digital Radio Week, Project Manager for Radio Ben Poor reflects on some of its highlights and what lies ahead for the rest of 2019.

Digital Radio Week collects together a variety of industry and public events around technology and innovation for digital radio, both broadcast and broadband. This year's edition lived up to its name for the first time, running across the entire week.

As usual, the week started with the public RadioHack event, now a key meeting point for enthusiasts and professionals to talk about both software-defined radio (SDR) and open-source software for digital broadcast. Radiohack is less a formal hackathon and more a chance to discuss and share ideas and projects.

Running in parallel were hybrid radio and automotive sessions run by EBU partners RadioDNS and WorldDAB. The past 12 months have seen further growth in support for the hybrid radio standards that RadioDNS helps to develop, especially in the United States: both NPR and Entercom – respectively a syndicator of over 1000 public radio stations, and the second largest radio group in the US – recently joined the RadioDNS membership.

The theme of automotive ran through the week, with a entire session devoted to "radio in the connected car" as part of the EBU Digital Radio Summit on Wednesday. Laurence Harrison talked delegates through the updated guidelines for in-car user experience from WorldDAB, along with a summary of what automotive manufacturers need from broadcasters. Audi renewed their commitment to radio, and brought with them a new Audi A6 to show their implementation of a hybrid radio user experience. Audi's Martin Koch urged broadcasters to use the existing tools available to them to make their brands look better in cars, including Audi models, and stated:

Another theme from the summit centred on what the radio industry should be doing around 5G. Following on from last year's update, delegates heard from the EBU's Marcello Lombardo, who shared some thoughts based on his research on the topic. Lombardo echoed comments from representatives of both DAB and DRM – that broadcast is likely to remain the main platform for radio distribution in the near future, and that organizations sometimes underestimate what broadcast can achieve – saying:

“The first 4G services started in 2009 and today we have 95% coverage [in major European markets]. If we assume a similar trend for investment in 5G, we won’t see a running service before 2030. Do we really want to wait 11 years for something where we don’t even know what form it will finally take?”

The Growth of Digital

Other sessions covered the growth of digital radio in Europe and globally. The NAB's David Layer and Brian Savoie shared news that HD Radio in North America is growing in adoption across the US, Canada and Mexico, particularly in cars. They discussed the importance of broadcast both in terms of coverage and its vital place in times of emergency. Reflecting the growth of smart speakers, they underlined the need for broadcast reception capability in such new devices, perhaps as part of an 'offline' mode. This follows on from the recent collaboration between EBU and the NAB's PILOT programme to create a fully voice-controlled radio that works transparently across broadcast and IP audio services.

From Australia, Jeremy Millar from the Australian Broadcasting Corporation (ABC) shared news that DAB+ listening is growing faster than listening over the internet and providing a vital boost to figures, especially when combined with youth formats such as Triple J. He also discussed the challenges of such a vast territory, traditionally covered using MW. Referring to the potential for existing Australian AM services to be replaced by digital, Millar said:

"[We are] reluctant to go with DRM as there’s a lack of receivers and no automotive support."

Towards the end of the week, EBU Members once again met along with invited guests for the second Radio Archive Workshop. Following on from the success of last year's inaugural event and the subsequent well-received report, Members again discussed topics across the archive workflow.

Archives are a rich source of unique cultural content – with public service media organisations as their custodians. Creative means for exploiting archives were presented, including a multi-platform media experience produced by Czech Radio to commemorate the Prague Spring of 1968.

The rise of new linear and non-linear digital channels means that this archive content can more easily reach audiences, and becomes a rich source of content for broadcasters to repurpose.

Broadcasters should first use the tools they have

The discussions during the Digital Radio Week once again underlined that broadcasters should grasp the added possibilities of their existing platforms, including DAB. Even in the connected car, broadcast still has a firm place, although it will need to develop and support a better user experience for automotive manufacturers.

While the possibilities of 4G have yet to be fully exploited, and 5G yet to be defined, broadcasters must pay heed to those who make the devices that drive a significant proportion of current listening.