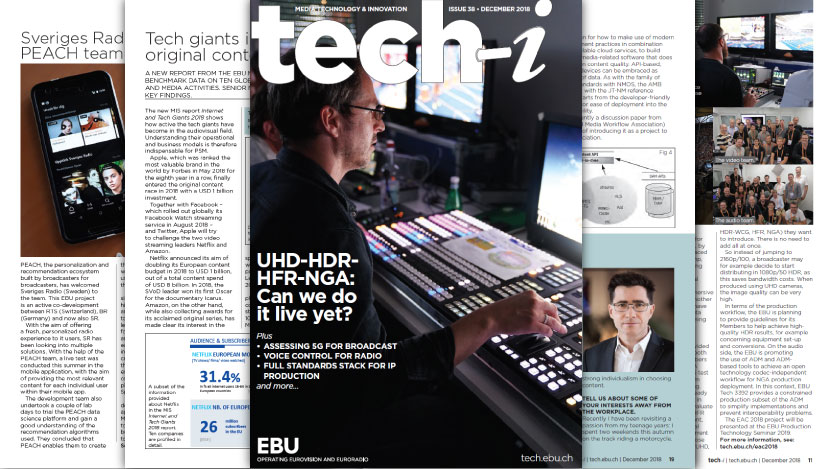 The inaugural European Championships last summer provided a perfect opportunity to test several emerging production and distribution technologies. The December 2019 issue of tech-i magazine looks back at the various tests and trials that took place and outlines what was learned. Download the PDF now.

About 40 representatives from five EBU Members and 20 industry partners worked together at the athletics stadium in Berlin to create content in 2160p/100 HDR HLG, 1080p/100 HDR HLG and 1080p/50 SDR. Audio in AC-4 (Dolby Atmos) and several flavours of MPEG-H audio were produced.

It was a mammoth effort on behalf of all involved but was well worth the investment of time and resources: valuable insights were gained into the challenges that lie ahead for those who plan to implement High Frame Rate, High Dynamic Range and Next Generation Audio. The tech-i article describes some of the main lessons learned.

The content produced in Berlin provided the basis of two important sets of media delivery trials, in Germany and Italy. In Munich, an IRT and EBU collaboration delivered several linear television programmes and on-demand content across the city of Munich using technology under development as part of the 5G ecosystem. An LTE broadcast (eMBMS) signal was transmitted alongside conventional unicast from four broadcast towers in a single frequency network mode, targeting TV sets and mobile phones.

At the same time, Rai's Aosta Valley test bed in Italy was the location for a trial of one of the key aspects of 3GPP Release 14, namely the ability to complement the urban coverage of cellular networks with the “umbrella coverage” of wide territories by means of broadcast networks. In parallel, a DVB-T2 network was used to deliver UHD content alongside HD content enhanced with HDR and HFR.

Read about both the IRT and Rai tests in the magazine.

There's a lot more essential reading in this issue of tech-i. Marcello Lombardo explains why recent decisions in Belgium and Switzerland give a misleading impression of the status of DTT in Europe; Brad Gilmer and Richard Cartwight introduce AMWA's Agile Media Blueprint as a developer-friendly approach to deploying media-related software; Michael Evans and Stephen Jolly describe BBC's experiments to use AI in production; and Ben Poor explains how radio can get smarter in future.