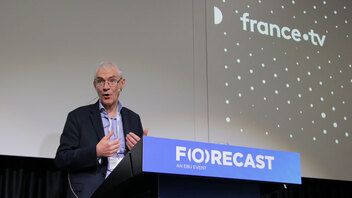 Jacques Donat-Bouillud, Director of Distribution at France Télévisions, delivering his keynote at FORECAST 2019

Wireless services remain a highly significant distribution channel for broadcasters; and there is a strategic need for public service media to ensure that future technologies such as 5G will meet their requirements. These are two of the main takeaways from this year's FORECAST conference, the EBU’s flagship event on wireless media distribution.

Now in its 21st year, FORECAST 2018 (19-21 November, Geneva), gathered more than 120 participants from across the industry and around the globe to discuss the evolution of media distribution technologies, spectrum issues, regulation and associated business models, one year ahead of the World Radiocommunication Conference 2019  (WRC-19) in Sharm el-Sheikh.

Roland Beutler (SWR/ARD), David Hemingway (BBC) and Cath Westcott (BBC) on some of the topics discussed at FORECAST 2018

Media distribution has seen some exciting innovations over the past ten years. New types of service such as video on demand, time shifting and catch-up services, as well as online distribution to mobile devices are all finding favour with audiences.

While broadcasters are embracing new media formats and delivery options, it became clear at FORECAST that they also seek to enhance their linear broadcasting channels, with traditional radio and television still accounting for the largest part of media consumption. Notable examples discussed at the conference included LOVEStv, the Spanish HbbTV platform jointly run by public and private broadcasters, and several DVB-related initiatives, such as work on improving the distribution of content around the home, targeted advertising for linear distribution, and the end-to-end ecosystem for OTT delivery that the DVB-I work aims to deliver.

A reality check for broadband and 5G

With OTT platforms and other internet services gaining in significance, broadcasters are also keen to ensure a consistent quality of experience that is comparable with that on broadcast platforms. Broadband distribution raises a number of challenges, ranging from prominence and visibility of public service content, to ‘free-to-air’ access, service integrity, and distribution cost. Delegates heard that existing regulation of broadband platforms currently doesn't address all PSM concerns. A poll run at FORECAST 2018 indicated that, for those present, universal availability was the overarching requirement that future distribution platforms must fulfil.

A number of presentations sought to temper expectations of 5G as the panacea for distribution problems. Current mobile networks are not suitable for a large-scale delivery of media content, in particular for popular live events. Broadcasters have been working with the industry in international standardization bodies such as 3GPP to ensure that PSM requirements are included in future standards.

The success achieved with FeMBMS in 3GPP Release 14 paves the way for the development of 5G terrestrial broadcast, but many open issues remain: how will 5G networks be operated? Will they be only operated by MNOs, or could 5G be used as a standard for ad-hoc "private" cells to support live production environments? How could the concept of 5G network slicing comply with net neutrality rules? How can spectrum auctions be successfully combined with coverage obligations? And what will be the cost for broadcasters and end users?

Frequencies need to be protected

Spectrum is a limited resource and with mobile services crowding into the space, traditional broadcasting has seen a substantial reduction of allocated spectrum in recent years. The World Radiocommunication Conference reevaluates its global guidelines for spectrum use every four years. Experts reporting on the WRC-19 preparations at FORECAST expected no further imminent threats to core frequencies used by the broadcasting sector – such as UHF band, C-Band, Ku band, Ka Band – for now. However, the subsequent WRC-23 is expected to reassess the use of the UHF band (470-960 MHz), with potentially far-reaching implications for the future of the digital terrestrial television platform.

Additional services and applications have also brought an increase of electromagnetic interference to broadcasting services, in particular from non-radio devices such as PLTs, LED lights, wireless power chargers. It was unanimously agreed at FORECAST 2018 that developing and keeping relevant standards and regulation up to date is key.