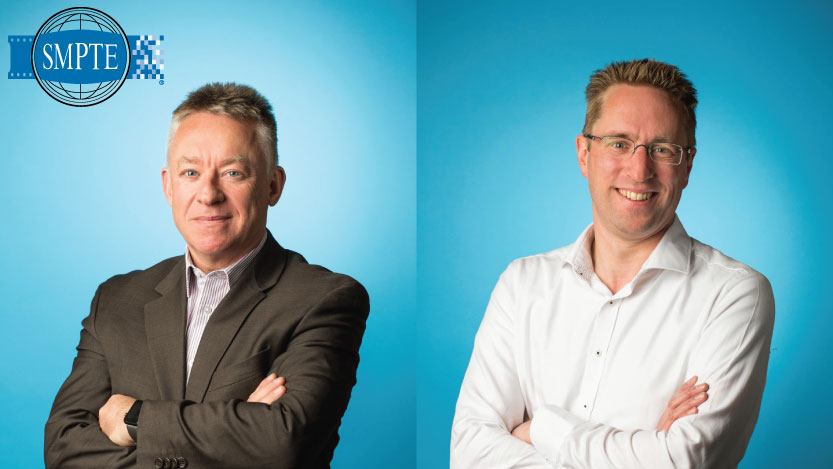 The EBU's Hans Hoffmann (above left) has been elected executive vice president of SMPTE, the Society of Motion Picture and Television Engineers. The organization, now in its second century, has developed thousands of standards, recommended practices and engineering guidelines, more than 800 of which are still actively used by the industry. SMPTE has also honoured the EBU's Frans de Jong (above right), awarded with a fellowship, and former EBU technical director Phil Laven, recipient of the Presidential Proclamation.

Hans Hoffmann is senior manager, media production technologies, in the EBU Technology & Innovation department. He believes his new role will bring value to EBU Members by better enabling them to tap into SMPTE's innovative and vibrant ecosystem.

"We need to understand the changes in the media landscape, to develop the right strategies and – most importantly – to implement them. As SMPTE works closely with the big West Coast USA players, both in traditional and new media, we have a chance to articulate the needs of public service media towards the industry as the technology evolves. This is a win-win situation for the EBU and SMPTE – together we are able to proactively shape the future of media."

Dr Hoffmann, who has worked with the EBU since 2000, will be SMPTE's executive vice president for the 2019-2020 term. His predecessor in the role, Dolby's Patrick Griffis, has been elected as president of SMPTE.

Frans de Jong, senior engineer in the EBU Technology & Innovation department, has been named a SMPTE Fellow 2018. Currently coordinator of the EBU's strategic programme on Video Systems, his focus is on production technology topics, such as (U)HDTV, system integration, subtitling, quality control and loudness. SMPTE fellowship is awarded to those who have attained an outstanding rank among engineers or executives in media and entertainment.

Phil Laven, who was director of the technical department at the EBU from 1997 to 2007, was awarded this year's SMPTE Presidential Proclamation. The award recognizes his significant contributions to the broadcast industry across a career that also saw him spending more than 30 years at the BBC, where he was instrumental in the development and implementation of digital television and radio broadcasting in the UK. More recently he chaired the DVB Project from 2008 to 2016.