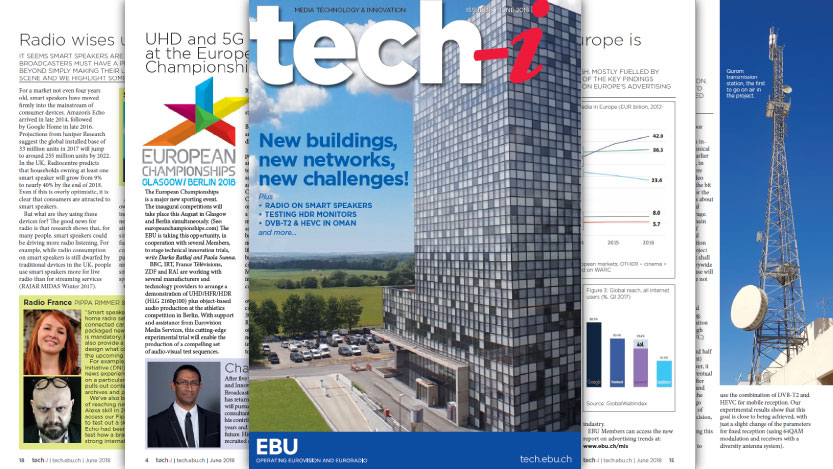 The June 2018 issue of tech-i magazine is now available for download, with the usual stimulating mix of articles on the latest developments in media technology. The cover features RTL City, a landmark building in Luxembourg, but also noteworthy on the media landscape as one of the world's first all-IP production facilities. Costas Colombus of Broadcasting Center Europe (BCE) describes how the project evolved, from initial discussions back in 2013 to going on air in April 2017.

"We made a decision that all signals, whether they came from external sources or from devices within the facility, would be converted to IP as soon as possible."

Read the full article to discover the mix of standards and equipment they opted for and what they've learned in the first year of operation. On the preceding page we introduce the EBU New Buildings Initiative, a new strategic programme where all Members that are building new facilities can discuss topics such as IP-based production infrastructures, best practice for spaces that support innovative working environments, and project/change management.

If the shift to IP production is one of the major media tech trends, another is the rise of the smart speaker. In this issue of tech-i you can read how the radio community is working to make the most of the opportunities they bring, with examples of projects at Radio France, Swedish Radio and VRT.

The magazine includes two reports on EBU projects that brought Members together to conduct important tests that will ultimately benefit the whole industry. In the production domain, RTS in Geneva recently hosted a session to assess the capabilities of currently available Grade 1 monitors with respect to High Dynamic Range content. On the distribution side of things, you can find initial results from the first year of the EBU Flow multi-CDN pilot. Six Members have been participating in the pilot: ERT, HRT, NPO, RTBF, RTÉ and VRT.

Elsewhere, we learn how EBU Associate Member PART (Oman) has become a digital terrestrial television pioneer in the Middle East, how the standardization community could learn a lot from the legacy of the late Horst Schachlbauer, and how the online advertising industry is booming in Europe. We also include a progress report from the EBU-led MediaRoad project, which is well on its way to re-energizing the media innovation ecosystem in Europe. Finally, we introduce the first in a new series called Partner Profiles, where we invite one of the many associations with which the EBU works closely to provide an overview of its strategy and priorities. First up is SMPTE.