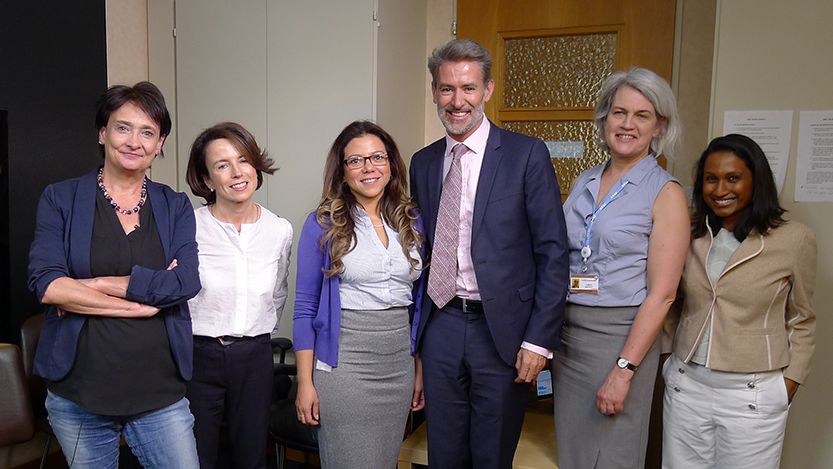 Every year, organizations around the globe contribute to Girls in ICT Day, an initiative backed by all ITU member states and designed to encourage girls to consider a career in Information and Communications Technology (ICT). Thousands of events in over 160 countries have been held already, giving girls an opportunity to challenge stereotypes, learn more about STEM roles (science, technology, engineering and maths), and to connect with successful women working in those roles.

For Girls in ICT Day 2018, held on Thursday 26 April, EBU senior engineer Elena Puigrefagut joined Lilian Marin from the ITU Satellite Service Division and the BBC’s Geneva correspondent Imogen Foulkes on a live video link between the BBC's studios at the United Nations in Geneva and the BBC studios in Birmingham.

Hand-on experiences to encourage and inspire

Cath Westcott from BBC World Service Group Distribution, who helped to organize the event, noted that “women make up 23 percent of people working in core STEM occupations in the UK”. She continued: “That’s better than it used to be, but still not good enough. If we want this to change, we have to engage directly with girls and encourage and inspire them by showing how exciting, creative and essential these roles can be.”

A group of female students, aged 14 to 15, then interviewed the Geneva group from Birmingham, gaining experience of an authentic live television scenario. Many of the questions posed by the students related to early school careers. Were the interviewees natural maths geniuses, for example, and had they always taken an interest in technology?

Asked what piece of advice she would give her own 14-year-old self, the EBU’s Elena Puigrefagut said: “Take an interest in everything and be confident – you can reach any objective. You will spend a lot of your lifetime at work, so you should find something that you enjoy – and you might find this in unexpected places and in careers such as in ICT. Trust yourself, explore all your options, learn languages, go abroad. Don’t let stereotypes determine what you think you might be good at.”

The event was set up by WiSTEM, a supportive community for women in STEM roles across the BBC, with support from the EBU. The UK’s ambassador and permanent representative to the United Nations, Julian Braithwaite, also joined on site in Geneva.

Girls in ICT Day is celebrated every year on the fourth Thursday of April.