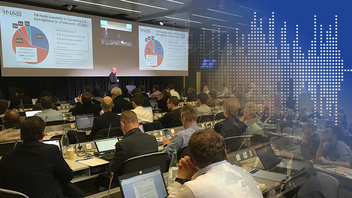 Note: Videos and PDF files of the conference presentations are made available to participants and EBU Members on the relevant event pages by early next week. Please log in to access them.

Over 120 delegates gathered in Geneva for the Digital Radio Summit – part of the annual EBU Digital Radio Week – to hear from EBU Members and others about the present and the future in radio technology and innovation.

The overall message of this year's summit was 'all about the User Experience', and was reflected across several areas including automotive and voice control. Several questions kept coming up throughout the conference: How can radio compete with the user experience offered by other audio services? And not just compete, what can radio do to go even further? And how can broadcasters drive change, rather than be swept away by it?

During the event, we caught up with Sam Matheny, CTO of the National Association of Broadcasters in the US, as well as Nick Piggott from RadioDNS and Patrick Hannon from WorldDAB:

In cars, radio is still prominent and drives a huge proportion of listening hours through the world, but the experience of radio in cars is evolving. Joe D'Angelo of Xperi described these changes as "table stakes" in order for radio to keep its prominence in the dashboard. Presentations from Xperi and Audi illustrated that the broadcast radio user experience can be enhanced with additional information, such as richer graphical branding and information about what is on-air. In particular, Audi issued the call to action for more broadcasters to provide logos, content and metadata to feed their increasingly sophisticated and capable in-car media surfaces.

Travis Baxter from Bauer, Europe's largest commercial radio broadcast company, made a point in the keynote session that would later be echoed by many speakers, saying: "If we don't join up to collaborate then we are one small voice against many. One small voice against Google and Facebook. Even when we do collaborate we are still quite small, but we need to come together to make ourselves as big as we can." Travis also treated the audience to his view of how digital switchover might affect commercial stations run by Bauer in Norway, predicting that by the end of 2018 total radio listening and commercial radio revenues would have increased and that public listening would have bounced back. Although the experience was disruptive, it would quickly prove to have been successful for everyone, Baxter said.

Sam Matheny, CTO of NAB in the US followed on by saying that broadcasters were "currently fragmented, but trying to work with global companies". Coming together and using scale to leverage change could be the winning tactic, Matheny said, pointing out that something as simple as using the same words on a global scale would help to drive this change. Matheny also pointed out that in times of crisis, people continued to turn to radio as their primary source of information, as witnessed during tragic events such as Hurricane Harvey in the US or the Tōhoku earthquake in Japan. It was this reliability of broadcast over mobile networks that drove the NAB push to get broadcast receivers in mobile phones, said Matheny.

Leading up to DRS, the EBU Radiohack once again brought together coders, solderers and thinkers to collaborate on radio technologies over two days. Attendees experimented with voice control platforms, open source digital radio broadcasting, and how consumer equipment can be used for low-cost transmission. Swedish Radio showed a portable case for remote contribution, following on from their work with Project Iris.

Video summaries of some of the projects at this year's Radiohack are available on the Radiohack event page.

Making opportunities from challenges was the theme of the first Radio Archives Workshop, which brought together a number of EBU Members to discuss their best-practice and issues. Spanning the technical aspects, with digitization and metadata, as well as different ways in which archives have been bought to life and turned into valuable services for audiences, the conference sparked several possible new collaborations and became a starting point for a more regular exchange of knowledge between interested Members.

As Graham Dixon, Head of Radio at EBU, and the BBC's Simon Tuff said, the event showed that there is a real need for effective archiving solutions and ways to exploit these treasure troves of content among EBU Members: