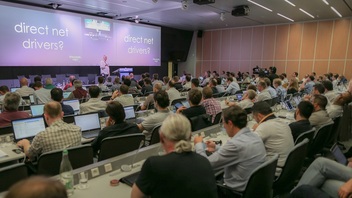 The Network Technology Seminar 2017 (20-21 June) recorded the highest ever attendance for an EBU Technology & Innovation event. With all available seats booked weeks in advance, it was extended to two overflow rooms and streamed live to dozens of remote locations internationally.

This high demand reflected the fact that NTS has now become the focal point for debate and exchange around IP production in Europe and beyond. The agenda included presentations by many of the world’s leading figures in the domain, several panel discussions, six tutorials and twelve demonstrations. Combined with several networking opportunities, the programme made for a rich and rewarding two days at EBU headquarters in Geneva.

Keynote speaker Markus Ostertag, from German broadcaster SWR, explored the motivations that drive broadcasters in their decisions: while IP certainly was "cool" technology, he said, it was the need for more efficiency, productivity increases and flexibility that drove broadcasters to IP. He noted the simultaneous need for change management, new processes, and above all, cost considerations.

A second keynote, from CBC/Radio-Canada’s Félix Poulin, provided a case in point. Describing the planned relocation of Maison de Radio-Canada, he said the transition to IP really meant two important shifts in technology: the first, moving from SDI to IP, is a necessary enabler for an even more important shift, from hardware to software and virtualization.

The drafter of the eagerly awaited SMPTE ST 2110 standard, John Mailhot (Imagine Communications), presented an update on the current status of the suite of documents, the process involved and the compromises necessary to push it across the finishing line. Andreas Hildebrand (ALC NetworX) described how infrastructure elements could fit together when built around the 2110 standard in its likely final shape.

The flexibility of IP is an advantage, but also a challenge for facility design, said Chuck Meyer (Grass Valley), providing one of the cues for a round of vendor panel discussions moderated by the BBC’s Phil Tudor and Mike Ellis. The need for metadata at the device level, for an understanding of NMOS and the ability to use COTS (commercial off-the-shelf) components to benefit from a larger market size were key points that arose during the discussions.

No time to wait

Several broadcasters have already crossed into IP production: disregarding the lack of a fully specified approach, the architects of these systems chose to build bridges using available technologies where necessary. A use case session showcased some of the most notable projects in Europe: Swedish Radio’s award-winning remote production solution, the ambitious RTL City Project, the BBC’s Cardiff Project, Sky’s IP-based MCR and Google’s new London YouTube Spaces gave participants insights into the challenges and lessons learned. The requirement for staff with relevant skills, UHD as a driver and dust as a recurring challenge for fibre optics emerged as some of the key take-aways of the session.

A panel discussion on cyber-security rounded off the event. With the move to IP, the cloud and to interconnected services in general, security is set to become an even greater issue, although it is often overlooked in an effort to get things to work. Andreas Schneider (SRG) and the EBU’s Adi Kouadio led a panel that debated best practices, the need to force vendors to adopt minimum requirements, and the forthcoming EBU R 146 recommendations on cloud security.