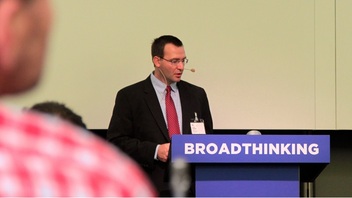 New approaches to streaming significantly improve the experience for audiences and facilitate improved workflows, but fragmentation and the coexistence of multiple standards are still major challenges for broadcasters – these were some of the takeaways at BroadThinking 2017, the EBU's premium event in the broadband domain, which covers streaming technologies, front end design, user experience and strategic aspects of media delivery over broadband networks.(EBU Members can view the BroadThinking 2017 presentations here.)

The continued lack of a single codec with support on all platforms was one of the problems noted by Thierry Fautier, VP Video Strategy at Harmonic Inc., in a keynote presentation that set the scene for the conference. Roland Beutler, Spectrum Manager at SWR, laid out strategic choices to be made with regard to 5G and suggested a reception only mode as one of the better choices for PSMs.

A presentation by MPEG-LA on the proposed licensing scheme for MPEG-DASH was followed by a discussion among conference participants about the scheme's possible negative impact on the deployment of MPEG-DASH and related specifications. The conference noted that the DASH specification doesn't describe mandatory elements in the client itself and discussed whether the IPR in question is as essential to the standard as it is claimed to be.

No time for buffering

Other presentations covered new approaches to VR-streaming, an update on the 3GPP standardization processes, CMAF and how HTTP/2 could impact the industry. Day two of the conference outlined trends in online media players and Content Delivery Networks as well as the Quality of Experience for the audience.

Eighty-one percent of users will stop watching a video that takes more than two seconds to buffer, said Julien Coulon, General Manager of Cedexis. The importance of metrics to quantify the user experience and identify performance issues was a recurring theme during the conference.

The event was rounded off with a number of demonstrations, allowing seminar delegates to experience some of the technologies covered in the presentations. On show were a low-latency setup with CMAF, DASH over ROUTE, a WordPress-based development system for HbbTV-apps and the EBU Flow Multi-CDN project.