New in the Tech Review: WiB for DTT and DAB+ in Tunnels 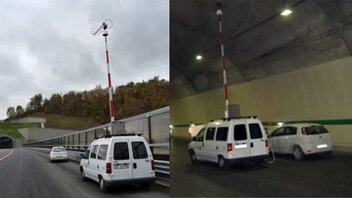 There were two new additions to the EBU Technical Review in recent weeks, each relating to different aspects of terrestrial transmission technology. The Technical Review has a long track record of providing useful insights into developments in media production and distribution technologies.

Italian broadcaster RAI plans to extend DAB+ digital radio coverage to the country's so-called "T-motorway" (the east-west A4 from Trieste to Turin and the north-south A1 from Milan to Naples). Service coverage for both fixed and mobile reception can largely be assured by a combination of high-power-high-tower (HPHT) and low-power-low-tower (LPLT) installations, with the latter helping in mountainous areas. Tunnels, however, are a different matter.

Tests by the RAI Research Centre confirmed that service continuity in tunnels is difficult to achieve. The normal method involves what are known as "leaky feeders", radiating cables running along the tunnel roof. This approach is, however, costly. Recent research, detailed in the EBU Technical Review, focuses on the use of direct RF radiation by means of antennas outside the tunnel (close to the entrance) or internally.

The Technical Review paper details the tests that were set up and the results of the subsequent measurements. It concludes that the direct radiation solution is indeed an economically viable approach to extending DAB+ coverage in tunnels. Further tests are planned to assess the impact of temporary service interruptions caused by, for example, big trucks running in parallel on all lanes.

The other recent addition to the EBU Technical Review concerns a newly proposed approach to Digital Terrestrial Television (DTT) called WiB. In a radical shift from current network planning models, WiB proposes the use of all available frequencies on all transmitters in a single wideband signal.

A WiB DTT network would potentially cover the entire UHF band, from a single wideband transmitter per site. Thanks to better spectrum utilization, the approach allows for a dramatic reduction in power and cost and delivers a 37-60% capacity increase for the same coverage compared with current DTT.

High speed mobile reception as well as fine granularity local services would also be supported, without loss of capacity. The Technical Review paper also outlines further possible developments of WiB, e.g. doubling the capacity via cross polar MIMO, which would be backward compatible with existing receiving antennas, and adding a second layer delivering either mobile broadcast or as mobile broadband.

To download these and other EBU Technical Review papers, visit our publications library.