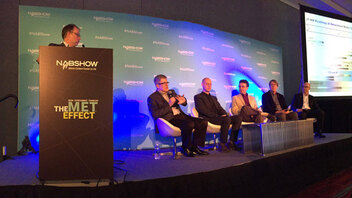 The EBU has partnered with several other leading organizations to create the IP Showcase, set to be one of the top attractions at this year's NAB Show (22-27 April, Las Vegas). It encompasses a suite of presentations and exhibits, demonstrating that real-time media production using IP networks has become a practical, flexible, and efficient reality.

The IP Showcase (North Hall, booth N4824) represents a rare and historic act of unity to avoid costly and time-consuming format wars and promote common sense interoperability. It is a joint effort by AES, AIMS, AMWA, EBU, IABM, MNA, NAB PILOT, SMPTE, and VSF and is one of the key milestones on the recently updated common roadmap maintained by the Joint Task Force on Networked Media (JT-NM).

Designed as a one-stop destination for engineers, CEOs and TV producers, the IP Showcase allows visitors to experience 60+ IP-based products from more than 40 vendors, demonstrating IP interoperability as set out in the roadmap.

Interoperability was also a key theme of last Saturday's panel discussion (pictured above) at NAB on "how to move a broadcast organization into IP and the cloud". The panel was moderated by Félix Poulin and featured Willem Vermost, both of the EBU Technology & Innovation department. Willem Vermost, Live and IP Architect, brought the perspective of European Public Service Media organizations to the discussion.

Topics discussed included IP standards for professional facilities, the enabling of personalized and immersive content, VR/AR/MR standards updates and next generation audio. The panel was held by the Inter-SDO group, an informal aggregation of standards development organizations (SDOs) that includes the EBU, SMPTE and AIMS as well as several global industry forums. It opened the NAB's Global TV Tech Day.

Elsewhere at NAB, the FIMS project – in which the EBU participates – is introducing new guidelines on cloud-based workflows as the part of its media services architecture (North Hall, booth N1431FP).