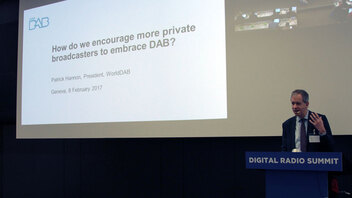 WorldDAB's Patrick Hannon at the Digital Radio Summit 2017, where he made a strong case for commercial broadcasters to embrace DAB+.

There was a real sense of radio as a medium in flux at this year's Digital Radio Summit in Geneva (8 February). Delegates heard that there are many challenges facing broadcasters: streaming services and podcasts are becoming increasingly popular, particularly among younger audiences, and with voice-activated personal assistants (think Amazon's Alexa) hitting the mainstream, radio risks becoming just one of a raft of easily accessible listening options.

The challenges to broadcast radio are very real, but it remains in a position of strength, with unique attributes that cannot be replaced by online-only audio services. An analysis by Marcello Lombardo (EBU), of the relative costs of distributing radio via DAB or internet, made clear that IP-only delivery would be much too expensive, both for broadcasters and listeners. "A DAB backbone with low data hybrid services on top is the way forward," he said.

EBU Head of Radio Graham Dixon made strong arguments as to why broadcast radio can and will remain relevant: it offers a service that is not mediated by gatekeepers (e.g. social media platforms) that may have undue influence on what services are made available; it is the most reliable network in emergency situations, where mobile broadband networks risk becoming overloaded; and it addresses problems of social exclusion by ensuring access to information as a public good.

The Digital Radio Summit coincided with the launch of the EBU Media Intelligence Service's Digital Radio 2017 report, which formed the basis for a presentation from David Fernandez Quijada. There are, he said, many myths around radio consumption that the most recent data show to be untrue. For example, despite assumptions to the contrary, people do still listen to radio in Europe, including young people: 85% of citizens listen every week, a figure that drops only very slightly, to 83%, for young people.

Which way to digital?

There is great diversity in how radio markets are developing across Europe, Summit attendees learned. Norway, where FM will have virtually disappeared by the end of this year, borders Finland, where digital radio services have not yet started (and may not start at all). Penetration of digital radio is rising steadily in the UK and Switzerland (where FM switch-off is also on the horizon), but for a large number of countries FM continues to dominate.

Efforts to establish a common Europe-wide receiver compliance mark for digital radio and to encourage the EU to create a regulatory instrument that would phase out analogue-only receivers are just two examples of the search for a common denominator in Europe. The Summit also heard about an industry initiative to standardize digital radio access via smartphone apps, the Open Mobile Radio Interface.

The question of car receivers is never far from discussions of the prospects for digital radio. A welcome presentation on the state of radio in North America, from NAB's David Layer, provided ample evidence of how the auto industry is keen to embrace radio as a key element of connected cars. The implementations, however, vary widely and FM continues to dominate.

EBU Members can access the presentations from the Digital Radio Summit here.

OUR WORK ON DIGITAL RADIO