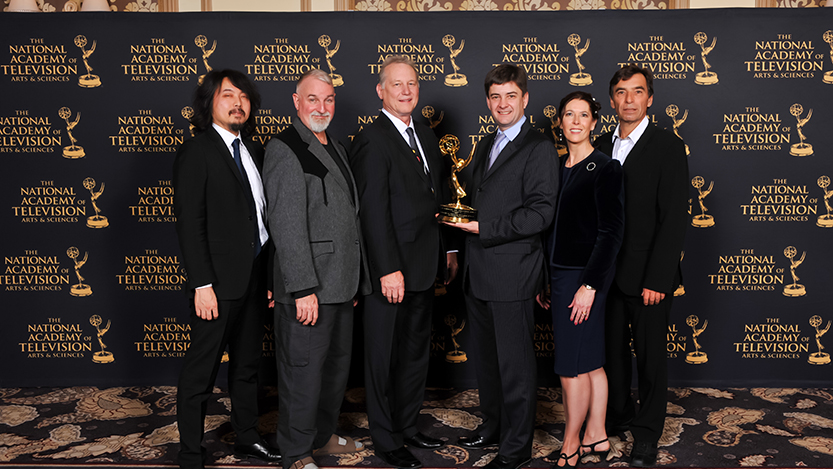 The W3C Timed Text (TTML) work won a Technical Emmy® Award in January 2016. The prize underlines the importance subtitling/captioning has worldwide. For the European Broadcasting Union (EBU), the award confirms the technical direction the union has taken in basing its EBU-TT subtitle standards work on TTML.

A particular challenge with subtitles is the need to balance the apparent simplicity of their rendering – a  few lines of text overlaid on a screen –  with the extensive data needed to make sure the subtitles appear in the right way on any screen. The existence of dozens of subtitling formats shows this challenge has been addressed by different organizations at different times, often without much success. While it is easy to create a new format, it is far from easy to make it globally accepted. The trick is to define the right profile; enough functionality to support all practical use cases, but not so much that the specification becomes unattractive to implement.

The Timed Text profiles for “Internet Media Subtitles and Captions” (IMSC) that W3C published in April 2016 may be such a worldwide winner. They have been tested with clear use cases and are well aligned with the subtitling work the EBU performed for the European market and the Society of Motion Picture & Television Engineers (SMPTE) for the US market, making IMSC a logical common format for distributing subtitles to online media worldwide. For users of EBU-TT-D, which is mandated by HbbTV and Freeview Play, for example, it means that their subtitles are automatically IMSC compatible, without the need to add anything to the files.

While the IMSC profiles contain enough information for sending subtitles, richer formats may be needed for authoring, archiving and repurposing. This is where EBU-TT Part 1 and EBU-TT Live come into the picture. Together these specifications complement each other and make up an ecosystem to create, archive, (ex)change, and distribute subtitles, both prepared and live, including the metadata needed to support broadcast workflows.

The new BBC Subtitles Guidelines are a good example of how to use EBU-TT Part 1 and EBU-TT-D in operation.  To show broadcasters the potential of the live subtitling specification, the EBU has started a Live Subtitling Interoperability Toolkit Project; an open source implementation of EBU-TT Live demonstrating how to create subtitling sources, processing nodes and encoders and how to carry subtitles over different carriage mechanisms. Interest in the work is not limited to Europe. So maybe by IBC 2017 subtitling will have received yet another award…

The EBU and the University of Pisa have agreed to collaborate on the development of software systems such as the EuroVOX project.

Over 100 radio executives and professionals from around the world attended the Digital Radio Summit 2020 and two related conferences, held at EBU headquarters...

Increasing clarity on the production workflows of the future

There was an air of optimism at this year's EBU Production Technology Seminar. While the challenges for public broadcasters have not changed – do more...