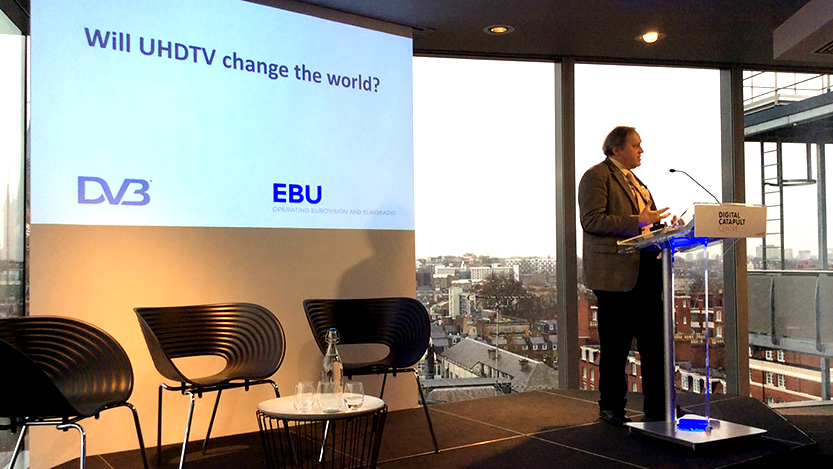 The New European Media Forum brings together media-related organizations from across Europe who help to shape the programme of collaborative projects related to the media that the European Union supports.  At the 2015 NEM General Assembly, EBU engineer David Wood was invited to explain the current status of standardization in Ultra High Definition Television.
Technical standards bodies from all parts of the world, the ITU, MPEG, DVB, and ATSC, are trying to decide which elements will need to form part of our future UHDTV television system.  Most discussion surrounds two elements.  The first is how the greater brightness of future TV sets can best be exploited. It will be possible for the TV image to have a much greater contrast range than today - we could say 'sparkle'.  The second is whether to include in the specification a new sound system which would allow sounds to be heard from 3 dimensions around the viewer, and allow he or she to 'personalize' their listening experience.
David Wood explains: "there are some forces at work speeding up the arrival of UHDTV, and others slowing it down". But there is no 'if' here, just a 'when'.   We suspect UHDTV broadcasting with all the features will start in about 2018.
The NEM General Assembly also discussed gathering a possible consortium of organizations to propose a relatively new kind of collaborative project, a 'Public Private Partnership' with the objective of encouraging the use by the creative community of the new media tools.  Simon Fell, EBU Director, was also present at the NEM GA and adds "Without good content, there is no purpose in media technology, so this kind of project would be very valuable".