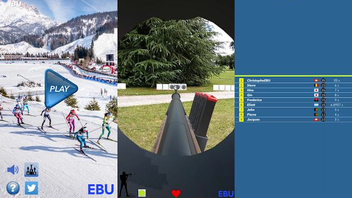 The EBU studies and analyses emerging immersive video systems, including Augmented Reality (AR). Of special interest are implications for broadcasters' workflows and technology roadmaps. This work is part of the EBU Strategic Programme on Video Systems.

Note: if you are having troubles following the links, try to log in to https://git.ebu.io first to make sure you have access. For any questions about the PoCs, drop an email to Sunna, Paola sunna@ebu.ch

Biathlon (Unity engine + Vuforia): a simple game, where the user has to shoot targets, not animals!

Papertoapp (Unity engine + Vuforia): this project shows how a preselected marker (e.g. a logo printed in a magazine) can be replaced with a video

Selfie-mask (Unity Engine + OpenCV plugins): An app that shows how facial masks, e.g. a flag, wrapped on a moving face