A landmark file format pact involving UK Public Service Media (PSM) had been 'fundamentally influenced by the EBUCore metadata standard,' one of the deal-makers said yesterday.

The agreement, reached by the Digital Production Partnership (DPP), which includes the BBC, ITV, Channel 4, Sky, Channel 5, S4C and UKTV, establishes the UK's first common file format, structure, and wrapper for the file-based delivery of programmes. 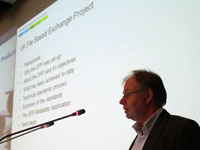 Kevin Burrows (pictured right speaking at PTS 2012), Channel 4 Chief Technology Officer of Broadcast and Distribution and DPP member, said the agreement would reduce costs and simplify matters for UK programme makers as they move away from tape towards a file-based, end-to-end workflow.

Speaking at the Production Technology Seminar taking place at EBU headquarters in Geneva, Mr Burrows said: “The DPP worked very closely with the EBU on achieving this file format, mapping its metadata to existing EBUCore and TV-Anytime metadata sets. This is a leap forward that has the potential to end confusion and incompatibilities and vastly reduce costs for UK content producers."

Lieven Vermaele, EBU Director of Technology and Development, said the EBU aimed to achieve a similar level of cooperation to benefit its entire membership. Mr Vermaele said the EBUCore standard, which has also been adopted by the consortium developing the Framework for Interoperable Media Services (FIMS), is central to facilitating this goal.

“Agreements like this accelerate progress in our industry,” Mr Vermaele said. “The DPP deal will speed the onset of file-based workflows in the UK, creating big savings that can be potentially redirected towards investment, training and programme making.”

The BBC, ITV and C4 have committed to begin taking delivery of programmes on file on a selective basis this year. After a pilot period, file-based delivery will become the preferred format for the broadcasters by 2014.

EBU and UK DPP are committed to future cooperation.