Progress on future requirements for media standards at SMPTE 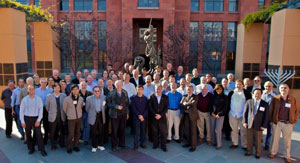 Users had their say during the SMPTE engineering meetings held this week in Burbank, Los Angeles at the Walt Disney Studios. In a special session representatives from broadcasting (including several from Europe) and the motion picture communities contributed their visions on future requirements for media standards.

Many issues mentioned during the session are seen as being critical for interoperability in digital workflows as well as for future media formats: Higher Frame Rate, QuadHDTV (4K) and beyond. This valuable user feedback will help inform the focus and direction of standards development.

In addition to this special session the SMPTE standards Technology Committees made good progress in their work:

- Network/Infrastructures Technology: new studio, 3D contribution and IP based interfaces including the mapping of various essence formats; a new project on timing and sync aspects in 3D production chains was established

- Time and Sync Technology: new types of AV synchronisation and Time Code for network based infrastructures