tech-i news: From a patrimony to an innovation platform 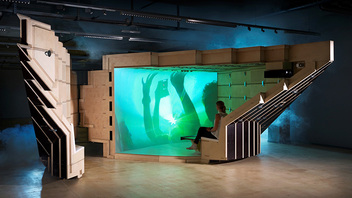 "It's the most important testimonial to the history of music covering Jazz, Blues and Rock." These are the words that Quincy Jones uttered to the press during the presentation of the preservation project for one of the world’s most important audio-visual patrimony of 20th Century music. The collection created throughout the 48 years of the Montreux Jazz Festival by its founder Claude Nobs, brings together the greatest artists of that period. The archive was officially recognized and inscribed in the UNESCO Memory of the World register in 2013. From Ella Fitzgerald, Miles Davis, Phil Collins to David Bowie and Prince, over 5’000 hours of ‘live’concerts were recorded in both video (of which 1/3 in HD) and audio (of which 2/3 as multi-tracks), and also visually depicted by thousands of photos.

The entire media collection is currently being digitized at EPFL as part of the "Montreux Jazz Digital Project", a collaboration between the technical university of Lausanne and “Claude Nobs Foundation” responsible for overseeing the reservation of the archive.  The Montreux Jazz Digital Project aims to transform this heritage into a unique archive of "raw material" for researchers to innovate in the field of music technology, acoustics, multimedia, architecture, and digital humanities. A substantial annotation and metadata enrichment program will be devised for schools, musicians and musicologists in particular.  Innovative user-interaction tools are being developed by EPFL labs and partners, and will be placed at the archive’s disposal to transform it into a living collection easily accessible by the public. The new building “Under One Roof” at EPFL will include an Innovation Pavilion with a “Montreux Jazz Café”, a space where the public will be able to discover the recordings of Montreux in an interactive, creative and innovative way.

The digitization tasks started in 2009, and will be completed in 2016. EPFL’s Metamedia Center (MMC) is leading the project, while digitization operations are outsourced to a specialized company whose competences and equipment allow for high-quality conversions and fast execution. Digitized files are generated in an uncompressed primary format to ensure lossless conversion to future file formats. A compressed MXF-contained secondary archive format is also produced for edition and broadcasting needs, together with multiple application-specific sub-formats. The digitized archive is stored on LTO tapes, of which two sets are created and kept in different locations for redundancy purpose. In addition, a hard disk-based storage system provides immediate and flexible access to the assets for EPFL teams working on the archive. With a capacity of several Petabytes (currently 2’500 TB), it is founded on Amplidata’s technology, and will ensure parallel streaming of multiple feeds to the future pavilion.
75% of the entire archive is now available in a digital file format. In January 2015, EPFL started acquiring the more recent recordings from the 90s, mostly DAT and HDCAM tapes. As a world premiere, HD video recording started in 1991 at the MJF. Acquisition of those tapes will take place at EPFL with the help of students specially trained by the MMC team. At the rate of 8 concerts per day (2 acquisition chains working in parallel), it will be completed by early 2016. A chain of automatic operations was designed in order to automatically route the digital media files to the storage servers or control/indexing workstations, generate sub-formats, extract metadata, analyze audio for R128-normalized playback, generate application-specific image overlays, and ingest all the related information into the archive database.

The Metamedia Center has developed strong competences in several key tasks needed around digitization and valorization (setting up) of an archive: quality control, database design and development, data clean-up, design of an access portal, song indexing operations, media conditioning/edition, storage architecture, IT-related equipment, design of valorization platforms for concert discovery (iPad Application), tapeless ingestion of uncompressed HD video from new concert sessions.
In collaboration with the Metamedia Center, several EPFL research laboratories contribute in valorizing the archive, for example in defect detection/enhancement, or metadata extraction (solo detection, smart thumbnail creation). Simultaneously, the archive has become a wonderful tool to promote EPFL innovation and technology transfer. Projects were defined with labs in the field of acoustics (projection of music in a user-restricted area, construction of models for room acoustics), signal processing (smart playlist generation and recommendation), or architecture (the Montreux Jazz Heritage Lab for immersive discovery of concerts). User-experiences were defined around those projects and proposed to the public in Montreux during the last festival editions.
The challenge for the coming years will be to ensure long-term access and preservation of the archive.