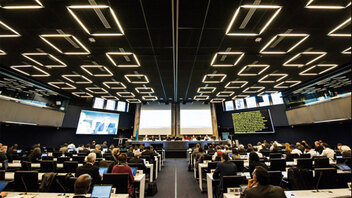 After two years of studying and negotiating options, and with the World Radiocommunication Conference 2023 (WRC-23) still over a year away, the International Telecommunication Union’s (ITU) Task Group 6/1 has now submitted its contribution for the final Report, for consideration by the Conference Preparatory Meeting (CPM23-2) in March 2023.

The EBU participated in Task Group 6/1, which prepared input for one of the conference's crucial topics: agenda item 1.5. The outcome on this item at WRC-23 in Dubai could significantly affect the future of free-to-air media broadcasting and wireless production technology in Europe.

The text submitted by Task Group 6/1 of the ITU-R sector for inclusion in the final report to WRC-23 includes 3 parts:

Many contributions were submitted by EBU and other stakeholders to the Task Group. However, the conclusions of the studies remained very controversial, and the only way to progress has been to collect and include the various divergent views in the text. This will make the work of the CPM23-2 – to produce a full report that is agreed and approved – quite difficult.

Agenda item 1.5 of this World Radiocommunication Conference is of major importance for any public service broadcaster in Europe, the Middle-Est and Africa using the UHF band to guarantee free-to-air receivability of content and intending to use this band for years to come.

In particular, item 1.5 concerns the 470-694 MHz frequency range in the radio spectrum, which is not only used for terrestrial broadcast, but also by the creative industries for wireless production equipment such as microphones, an indispensable part of modern production practices for which there are few adequate alternatives. However, as was the case at previous WRCs, mobile network operators are asking for access to more of this precious chunk of Spectrum.