Even better measurements: Live IP Software Toolkit version 2.0 is out 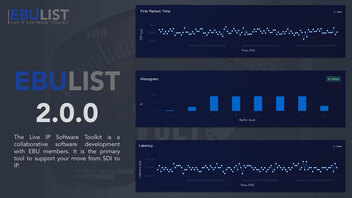 The EBU has published a new version of the Live IP Software Toolkit (LIST) with a host of new features and improvements that broaden the scope of the tool, and further improve its general useability.

LIST is a suite of software tools that helps to inspect, measure, and visualize the state of IP-based networks and the high-bitrate media traffic they carry. The new v2.0 is featuring new functionality and measurements, new and improved GUI, better performance and responsiveness, and better expandability.

The Live IP Software Toolkit is a collaborative development with contributions from CBC/Radio-Canada and VRT Belgium. It is open source and freely availabel to all EBU Members (links and more details can be found on the EBU LIST page).

New features and functionality include:

One year after the inception of 5G-RECORDS, the consortium has now entered the second phase of testing for its ‘multiple camera wireless studio’ use-case.

The September 2021 issue of tech-i magazine is now available. The cover features the core team behind the project that won this year's EBU Technology &...

The EBU will promote the creation of dedicated data spaces for media and gather media specific requirements for the Gaia-X federated infrastructure and...