Implementing 5G broadcast: what are the spectrum options? 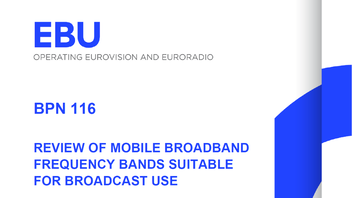 An EBU report published this month concludes that UHF spectrum in the sub-700 MHz (470–694 MHz) band holds the most promise for the future deployment of LTE-based 5G Terrestrial Broadcast services. Such services could be deployed under the existing international rules that govern how the band is used.

With audiences increasingly using mobile devices to view content, broadcasters are actively exploring how mobile broadband technologies can be best used for the distribution of linear broadcast services. The availability and suitability of radiofrequency spectrum is a key aspect of this and is the focus of EBU BPN 116 “Review of mobile broadband frequency bands suitable for broadcast use”. The report, available to EBU Members only, was first published in 2018 and revised in March 2021.

The mobile network configuration options* that are of most relevance for linear broadcast distribution are ‘supplemental downlink’ (SDL) and ‘standalone downlink only’ (SDO). Both can provide downlink broadcast content but while SDL has to be associated with uplink spectrum in another band, essential to establish the connection with a mobile network, SDO is a one-way transmission from the content provider to the user without the need to connect with a mobile network.

For example, the SDL allocation in the L-Band (1452–1496 MHz) provides a large bandwidth for the distribution of audiovisual content and could be ideal for LTE-based 5G Terrestrial Broadcast/SDO use. However, that would require administrations to reallocate it to broadcasters, which seems unlikely given broadcasters’ reluctance to use it in the past.

The SDL identification in the 700 MHz band duplex gap – the range between the uplink and downlink frequencies – has good technical potential for SDL but it is not suitable for SDO use because of the risk of interference to and from mobile network services elsewhere in the 700 MHz band.

The easiest choice then for LTE-based 5G Terrestrial Broadcast/SDO use is the sub-700 MHz (470-694 MHz) band. Under the GE-06 rules, such services could be deployed, provided they comply with the bandwidths and spectrum masks for systems defined in GE-06.

The report identifies some issues that require further work. As the standardization process is continuing in both the technical and regulatory areas, it will be necessary to update BPN 116 in due course.

*Two other network configurations are considered in the report, ‘frequency division duplex’ (FDD) and ‘time division duplex’ (TDD). However, since the operation of FDD and TDD networks, offering full unicast services, is beyond the scope of EBU Members, the report focuses on the potential frequency bands that broadcasters could use for SDO and SDL arrangements.