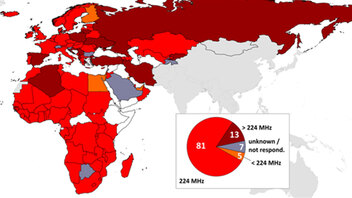 Most countries in Europe, the Middle East, North Africa, Sub-Saharan Africa and parts of Asia are planning to either continue to operate or further expand their Digital Terrestrial Television (DTT) services, the early results of new survey show. The survey on the use of spectrum was conducted by the International Telecommunication Union (ITU) in preparation for the World Radiocommunication Conference 2023 (WRC-23), which globally coordinates the allocation of the available frequency spectrum to media and telecommunication services.

The survey collected responses from 123 countries between February and August this year. The final results are expected in March 2021, but the interim results allow for a number of conclusions.

The interim results show significant support from administrations in the surveyed region for continued access of DTT to the current UHF spectrum used for terrestrial broadcasting.

The information gathered will have a bearing on WRC-23, which is scheduled for November 2023 and will discuss possible changes in the UHF spectrum allocation to broadcasting.

Working with and on behalf of its Members, the EBU follows and participates in several relevant areas of the spectrum negotiations in Europe and in the ITU. For more information and to contact us, visit the EBU Strategic Programme on Spectrum.